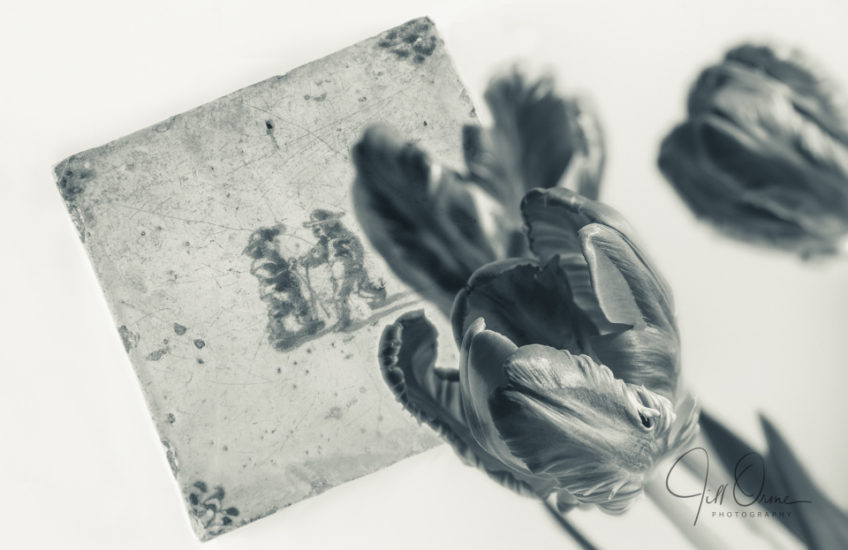 When I saw the theme for today’s Mono Monday, kindly hosted by TheAphid, my immediate reaction was “A selfie should cover it” – but then I got a grip, stuffed my (uncharacteristic) panic about an approaching Significant Birthday back into its box, nailed down the lid, and went off, whistling bravely, in search of an antique something-or-other.

R and I are lucky enough to own a few antiques, some inherited from our families (memo to self: do a list, so that if we die together in some freak, cake-related incident, the kids don’t just think “What is this rubbish?” and stick it all on eBay), and some acquired. Most of the acquisition, I must confess, has been done by me – partly because (except in the crucial matter of guitars) R is just not that acquisitive, but largely because I have a History Thing, and he doesn’t. Or at least, he didn’t; he tells me that the History Thing is now starting to rub off on him as well. So it’s all my fault, which makes it OK.

The History Thing is a kind of shivery feeling I sometimes get in connection with an object, or more rarely a place, when I feel as though the curtain of time has somehow parted and I’m literally touching the past. It sounds disgustingly fey, written down like that – and I would hope, if you know me in person, that fey isn’t the word that immediately comes to mind when someone speaks my name: I’m not generally especially fanciful, and I definitely don’t believe in ghosts. But just sometimes…. I get this thing. The first time I ever went to Chedworth Roman Villa, with R and the Offspring, it hit me so hard that I could barely breathe, and I had to have a bit of a sit-down. And there are things that we own that do it to me too, though in less dramatic fashion: the long case clock made by my 5x great-grandfather, for example, and a Georgian wall cupboard that came down from R’s family.

When R and I were in Amsterdam, back in the spring, I kept getting the History Thing and gravitating towards displays of old Delftware tiles in antique shops – and there are lots of shops, and lots and lots of tiles. Tin-glazed pottery began to be made in the Netherlands in the C16th, providing a cheaper version of the beautiful blue and white porcelain that the Dutch East India Company imported from China for those who couldn’t afford the genuine article; and blue and white tiles quickly became extremely fashionable in Dutch homes. You can still see them in preserved houses such as the Museum Van Loon in Amsterdam; but of course, over the years many houses were updated and remodelled, and their old tiles were removed and came into the hands of salvage merchants and antique dealers.

The rules for pricing these old tiles are pretty straightforward: the older it is, and the better condition it’s in, the more expensive a tile will be; and the better the painting, and the more popular the subject matter, the more you can expect to pay. So if you’re looking at an early C17th tile in good condition with a nicely-depicted dog on it, expect to have to part with at least a couple of hundred euros; whereas a rather poor mid-C19th example might only cost €15.

The shop from which I bought this had a huge cabinet along one wall with pull-out trays full of tiles, which they had helpfully arranged by period, and more or less by subject. I knew that I wanted a C17th example, and then it was just a question of balancing the condition and the design with the amount that I was prepared to pay (and the fact that R was waiting for me in the Rijksmuseum café, and I didn’t want my coffee to get cold). I happened across this tile quite quickly, and it immediately put me in mind of the little figures of peasants I’d seen in some of Rembrandt’s sketches; I did consider some other possibilities, but kept coming back to this one, and happily after I’d bought it (for I think €45, after negotiating a cash discount) and skipped off to the café with it, R thoroughly approved my choice. It was dated around 1675 by the dealer, which is obviously an estimate – based on the design, and probably also on the setting from which it was removed – but just think about that: 1675 was the year in which Vermeer died, and six years after the death of Rembrandt.

Because, after all, it’s just a photo of a tile, I decided to add in a second old thing, which is an old photo of some parrot tulips, and to get in a little Photoshop practice by combining the two images. I’m now a little more skilled with the Magic Wand and Refine Edge tools than I was before – though looking at this now, I wish I’d decreased the opacity of the tulip layer a bit further, to make it clear that you’re supposed to be able to see through them. Another memo to self.