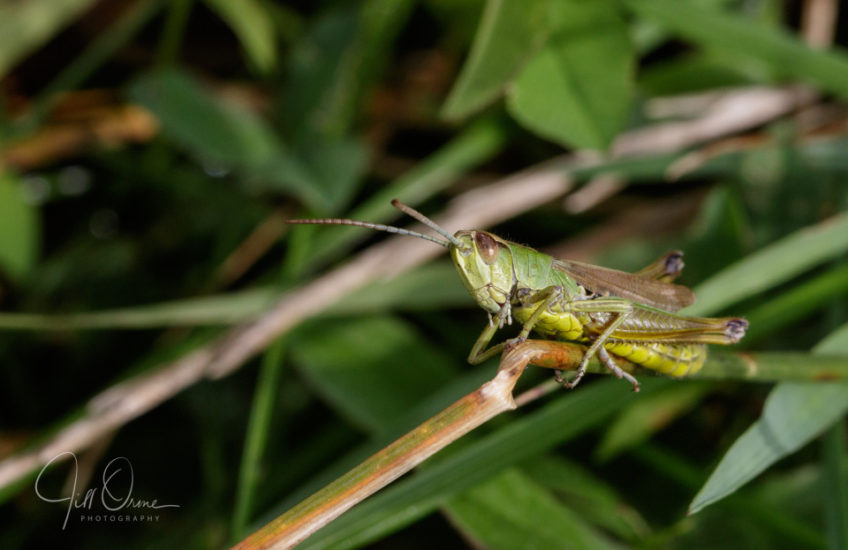 Over the course of this summer I’ve become increasingly interested in grasshoppers and crickets, as I’ve noticed them pinging around the butterfly meadow. They’re extraordinary to look at: the design of their exoskeletons makes them appear quite prehistoric, I think – which is reasonable, because according to Wikipedia they’re the oldest group of chewing herbivorous insects, and have been around for about 250 million years. They also present a special challenge to the macro photographer in that, unlike many other insects, they don’t tend to freeze when you turn the Eye of Sauron on them, but simply use the propulsive power of their huge back legs to spring out of your way. So I’ve spent quite a while over the past few weeks, bum in air, following them through the undergrowth with the camera, waiting for a pause in their progress and then trying to capture a few reasonable images before the next jump.

This is a male Chorthippus parallelus, the Meadow Grasshopper, but lest you should be impressed by that confident assertion, I’ll confess right now that there’s no relationship between my interest in these insects and my level of knowledge about them. I can get as far as short antennae = grasshopper whereas long antennae = bush cricket; and there’s one bush cricket I see regularly which I can identify by its rather splendid markings – that’s the Roesel’s Bush-cricket (Metrioptera roeselii), of which I’ve posted an almost-focused shot as an extra today. 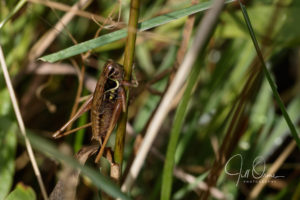 But when it comes to distinguishing between different grasshopper species, my knowledge extends only as far as knowing who to ask: there’s an enthusiastic Orthoptera group on Facebook, and a posting there usually elicits an identification within a few minutes – as it did today with this handsome chap.

I probably ought to buy a book.