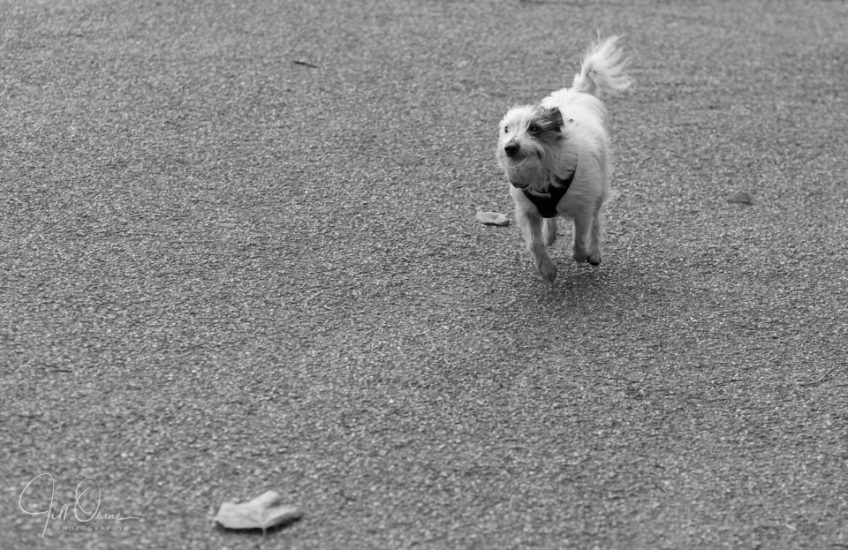 It’s been a strange old day, weather-wise. The remnants of Hurricane Ophelia have battered Ireland, and sent storm-force winds swirling across much of Great Britain; we haven’t had much rain here in the Midlands, but this morning it seemed as though it was never going to get properly light. Nevertheless, I needed a photo, and I thought I might be able to capture some movement at the Butterfly Farm in Stratford – so off we went through the gloom. I had thought of taking an external flash unit with me, but decided as I was packing my bag that I really wouldn’t need it.

I really did need it. At one point I was using ISO 2000 and f/2.8, but still couldn’t get my shutter speed above 1/80 second; so there was lots of movement in my shots, but it was more the grainy, mushy kind than anything attractive, or indeed, decipherable.

Eventually I gave up and went off into town to join R for lunch. As I was walking towards the Old Tramway Bridge I happened across a woman exercising two dogs in the park on the south side of the river; she was using one of those ball launcher jobbies to hurl a tennis ball, and this Jack Russell was having a fabulously entertaining time, chasing down the ball and bringing it back to be thrown again. I still had crazy settings on the camera from being in the Stygian Butterfly Farm, but I rattled off a few shots while spinning wheels, and luckily some of them came out reasonably well.

When R and I started back towards the car after lunch the light was still dim and yellow, but as we walked the sky began to clear in a very strange way, with the sun shining red through a murky haze and causing some unusual light effects on the water. Because I was using a telephoto lens I couldn’t get a shot containing both the sun and the reflections, but the extra I’ve put in here gives you some idea of how odd it was – the river quite often looks like this at sunset, but not at quarter past two in the afternoon. 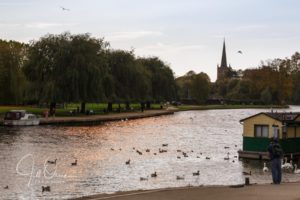 I’ve since read on line that the somewhat Mordor sky was caused by Saharan dust in the atmosphere. Foreign dust, getting into our storms, coming over here and making our sun look all funny…. it’s time we took back control of our weather.