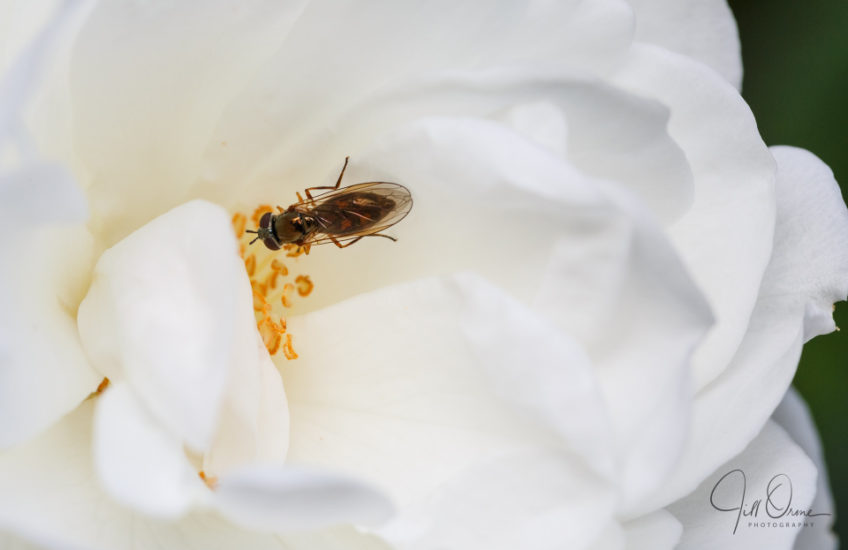 The warm weather we were promised today failed to materialise; after a morning of doing useful domestic things and (as ever) back processing, I strode confidently into the garden with the macro, expecting to find the place teeming with insects, and almost froze to the spot. That might be a slight exaggeration, but it was certainly chilly, and so it wasn’t surprising that were very few bugs to be found. This tiny Melanostoma hoverfly was feeding on my iceberg rose, and probably also taking advantage of the shelter it offered.

My only other decent find was a Red Admiral with attitude, which I’ve added as an extra. 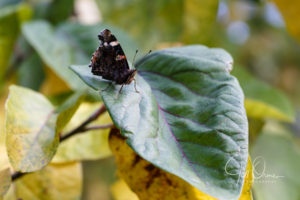 I spotted it sitting on a leaf of the quince tree, and slowly walked towards it, expecting it to fly up at any moment – but instead it stayed put and eyed me with what felt like disfavour. I like the photo partly because of the attitude, and partly because it’s nice to see [i]something[/i] in this tree, which has let us down this year by producing just one quince. The angle of the shot also shows quite nicely that this is one of the so-called four-footed butterflies: it’s sitting on its middle and rear legs, the front, vestigial pair being held curled up just below the head. To my eye they make it look as though it’s wearing a fluffy scarf – which on a day like today wouldn’t have been a bad idea.