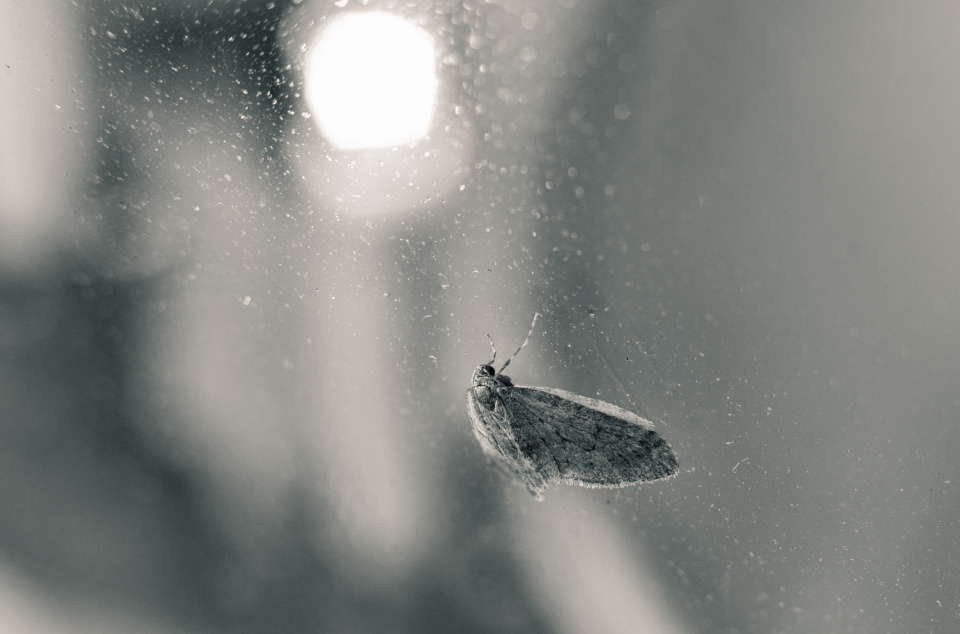 It wasn’t very mobile when I photographed it, though the wind was ruffling its wings. It had arrived overnight with an friend, drawn to our Advent light, and they had settled on the sitting room window; when I spotted them this morning I thought they’d make a good photo subject for today. It’s about 2cm from head to wing tip; I took six images with the 21mm extension tube on the 50mm lens, and stacked them in Photoshop. The mono processing was done in Topaz B&W.

I really must clean the sitting room windows before Christmas.

R and I went to Broadway this morning, to drop in a letter of thanks at the vets and pay their bill; then we stopped in the village for coffee and cake, today’s excuse being that it’s my birthday. Afterwards we popped into Cotswold Trading Company and bought a Thierry Poncelet JRT cushion – you know, just because. I’ve put it in the sitting room, where so far it hasn’t peed on the carpet.

Apart from that I really haven’t done very much today – I’m still rather down, and all the distress has taken a toll on my joints, so I’m being as kind to myself as possible until everything settles back down. But I had as happy a birthday as could be achieved in the circumstances – lovely cards and (mainly photography-related) presents from the family, lots of charming messages on Facebook from people all around the world, and a nice meal cooked by R. All in all, I’ve felt pretty spoilt.

I know that some of you are kindly concerned about Arthur, and I’m happy to tell you that I think he might be starting to get used to being an only dog. He was still rather restless and unhappy this morning, but when R and I both went to talk to him this evening his response was something like “OMG – WHAT NOW???!!!”, which is far more like the normal hound. He heaved himself off the sofa and retreated grumpily to his basket, showing that he wanted to be left alone rather than comforted, and though obviously we’ll still keep a close eye on him, I found this reassuring.