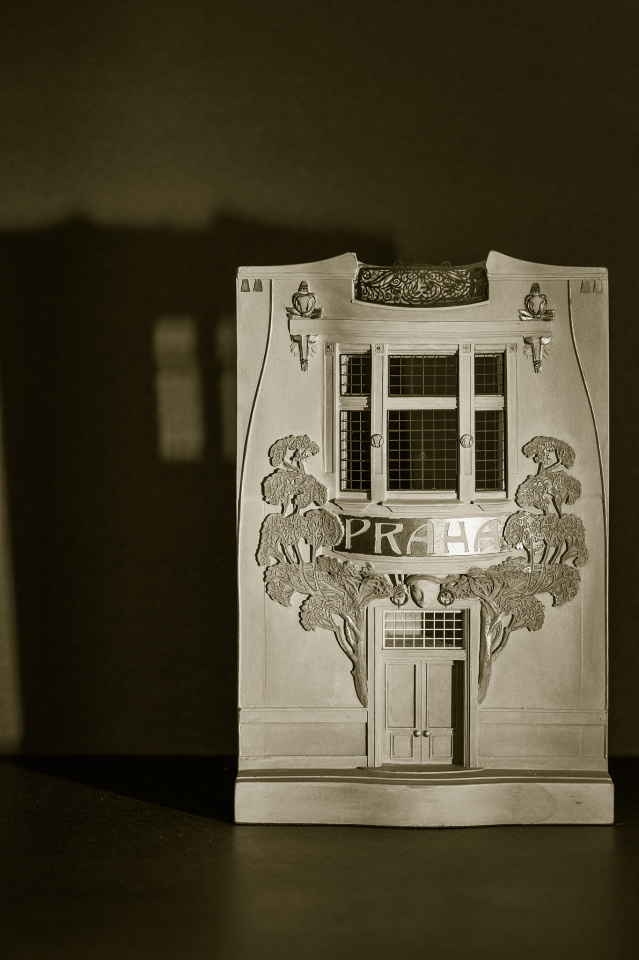 I bought this Timothy Richards doorway model of the Hotel Central in Prague for R about fifteen years ago, just because we both love Art Nouveau. We vaguely said that one day we would go and find this building – and maybe even stay in it! – and then pretty much forgot all about it.

Fast forward to 2012, which was a truly dreadful year in both our lives; but in the autumn we managed to get away for a lovely break in Vienna, a city neither of us had visited before but with which we both fell immediately in love. We were staying at a hotel called the K+K Maria Theresia, which I’d found on line and booked on the strength of some excellent reviews – and this turned out to be one of my better decisions because it was a very nice hotel indeed: well-placed, comfortable, and with a really excellent buffet breakfast, which set us up nicely each morning for a day of yomping around the city. As we walked through reception one day we stopped to look at a display of brochures for the other hotels in the K+K group, and were bowled over to realise that one of them was the Hotel Central in Prague.

So, of course, we had to go. In 2014 we reached our 25th wedding anniversary (something which surprised us quite a lot, and probably a number of other people too), and we spent it in Prague, staying at the Hotel Central. And was it as nice as we’d hoped it would be…? Oh yes – it truly was. I just went back through my photos of the holiday, looking specifically for shots of the hotel to put into a Flickr album so that you can compare the model with the reality if you’d care to, and just flicking through them has put a huge smile on my face.

I shot the model in several different ways, but R chose this view because, he said, “It has a touch of Vienna about it too.” And received an immediate hug, because I was aiming for a kind of noirish Third Man vibe. And that is why, dear reader, I’m still married to him after 27 years.