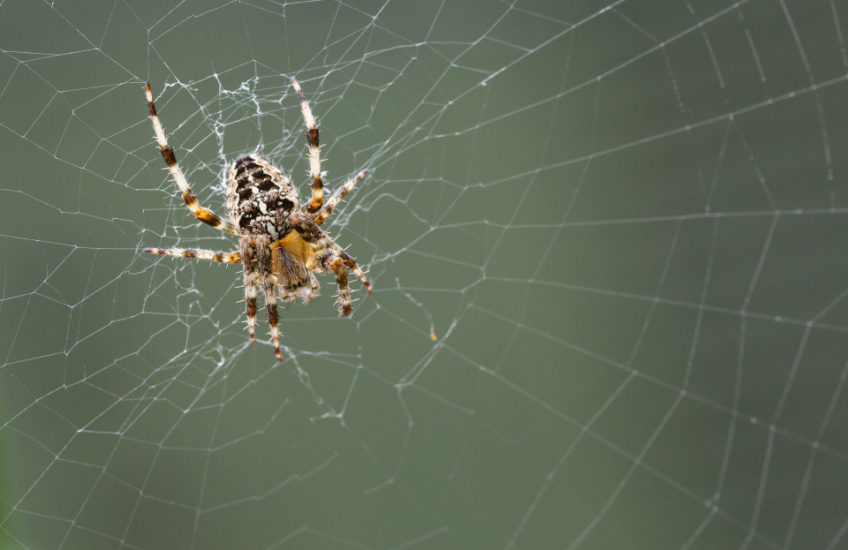 This is beautiful, don’t you think? The markings are really exquisite when you get up close.

What?? Where’s everybody gone…?

So yes, we’re back to the autumn, when I post photos of big fat garden spiders, and all the arachnophobes shriek and run away. Actually, this one wasn’t big or fat – I only noticed it because I was stalking a tiny Platycheirus hoverfly and had my head more or less inside the rosemary where it has strung its web. It’s working on its size though: when I first spotted it, it was eating what might once have been a small beetle, but it then dropped its prey – I’m not sure whether that was because I startled it, or because it had already eaten all the good bits and was essentially throwing the exoskeleton over its shoulder into the fireplace.

Incidentally, I used to be terrified of spiders myself. But knowing this response to be entirely unreasonable (living as I do in England, where there are no dangerous spiders outside of zoos, and the odd supermarket bunch of bananas), when I had children I decided that I was not going to pass on my irrationality to them. So my mantra became “Spiders are good, because they eat horrid flies. We like spiders.” And over time – who would have thought? – this positive thinking worked on me (though not on Child One, who always was supremely contra-suggestive). So now, though I wouldn’t go so far as to pick one up, I’m quite happy to stick a large lens in its face.