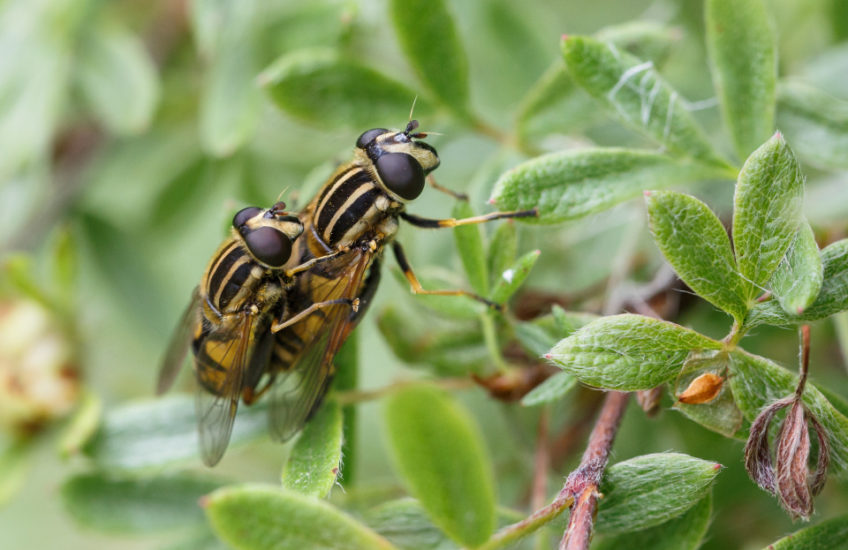 I was wandering up the garden this morning, just looking to see what was about, and a strange movement caught my eye as a bright and strange-shaped bug disappeared into the depths of a Potentilla. When pursued with the macro this turned out to be two Helophilus pendulus hoverflies [i]in flagrante[/i].

The situation was tricky because they were right in the cluttered heart of the shrub, so inserting the camera alongside them wasn’t easy, and getting it into a reasonable plane for a close-up was harder yet. Shortly after I took the second of the two shots I’ve stacked to create this image, the male demonstrated his disapproval of my voyeurism by removing the pair of them – and by the time I’d extracted self and camera from the Potentilla they were nowhere to be found.

If you have the time, this does look much better full-screen.

This afternoon one of our vets came out to the house with a veterinary nurse to give Arthur a thorough check-up, because he has been having difficulty in pooing for the past couple of days, and given his age I feared that something rather nasty might be going on. However, the good news is that after a lengthy examination, of which I’ll spare you the gorier details, Chris is pretty confident that the issue is arthritis rather than bowel obstruction. And I was greatly cheered by the ferocious energy with which Arthur fought against having an internal exam done: there is, it seems, life in the old chap yet.