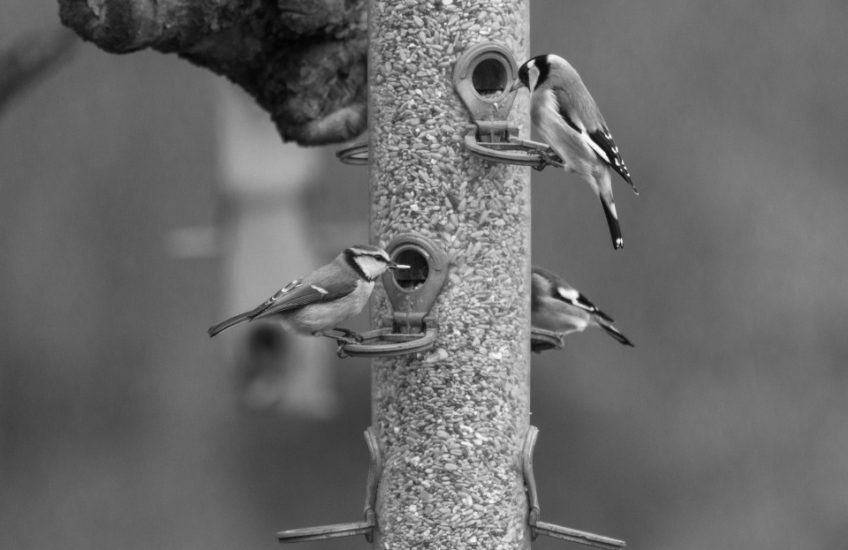 A leap of faith happens every time I go outside and sit on the patio with the camera: the birds know I’m there, but they’re hungry, and after watching me from the trees for a few minutes they decide that I’m not presenting an immediate threat and they risk coming down to feed. They still watch me quite carefully though – I can pick up a mug of tea from the flagstones provided I do it slowly, but if I shift my position in the chair, or suddenly move the camera, they all take off.

I know how precarious their energy balance is in this weather, and try not to frighten them into flight, but some are more reactive than others. Blue tits and great tits are the boldest, followed by goldfinches and greenfinches. The female spotted woodpecker came down twice while I was there this afternoon, as did several blackbirds, a couple of collared doves, a robin and a solitary woodpigeon. Chaffinches are very nervous, as are dunnocks. For the first time today a yellowhammer came to feed on the ground while I was outside – but he was quite scared, and flew away while I was trying to edge the camera into position to photograph him.

Interestingly the larger and more predatory birds such as jackdaws and magpies won’t come down while I’m around – which probably means that on balance my presence is a good thing for the smaller birds, because they get a clear run at the feeders. At one point there was quite a large flock of larger but unidentifiable birds swooping about over the garden: there must have been several dozen of them, some of which then settled in a tree about fifty metres away from the house, and when I turned the long lens on the tree they turned out to be mainly fieldfares, and some redwings. I’ve put that in as an extra – even though it’s a very distant shot of them I’m pleased, because it’s the first time I’ve ever captured a photo of redwings, which are shy and usually fast-moving. If you don’t know what a redwing looks like these may all seem like the same bird to you at first glance, but look for the ones with a red patch just in front of the wing, and pale eyebrow markings – there are certainly three in this photo, and probably more. There’s a Wiki about them here. 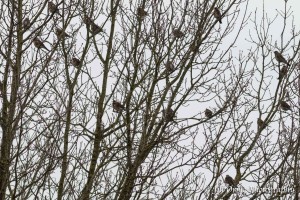