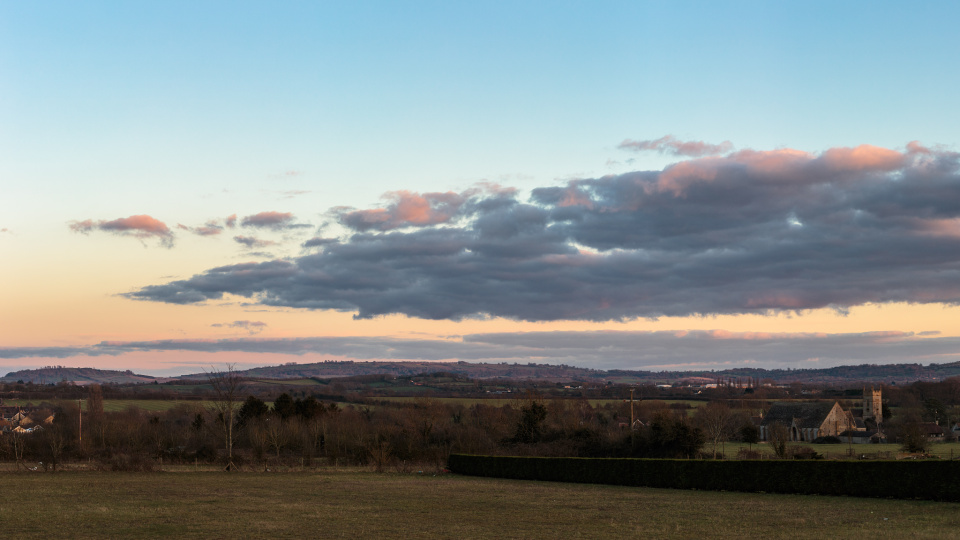 It has been a staying indoors kind of day today: fine, but with a bitter north wind that brought me home shivering from Arthur’s walk this morning despite a thick ski jacket. I ventured out into the garden before lunch and took a few photos, but the light was dim and flat and everything looked drab and tired.

Late this afternoon I checked to see if there might be a sunset – the western sky didn’t look too good, but as sometimes happens there was better colour over to the east. I nipped out to a viewpoint I had spotted the other day, which looks out over the Littletons towards the Cotswolds, and took two sets of panorama shots; thirty seconds later I was back in the car, and a couple of minutes after that I was back home in the warm. Job done.

So here you have the last of the sun coming from behind me and picking out Middle Littleton Church and Tithe Barn. On the horizon at the left of shot is Meon Hill, then Ebrington Hill, and on the right of the photo the Cotswold Edge. Back in the day all of this land and much more belonged to Evesham Abbey; the tithes (or tenths) of produce that were owed to the Abbey as tax by local farmers and cottagers were stored in a network of large barns, including this one. Today Middle Littleton Tithe Barn belongs to the National Trust.