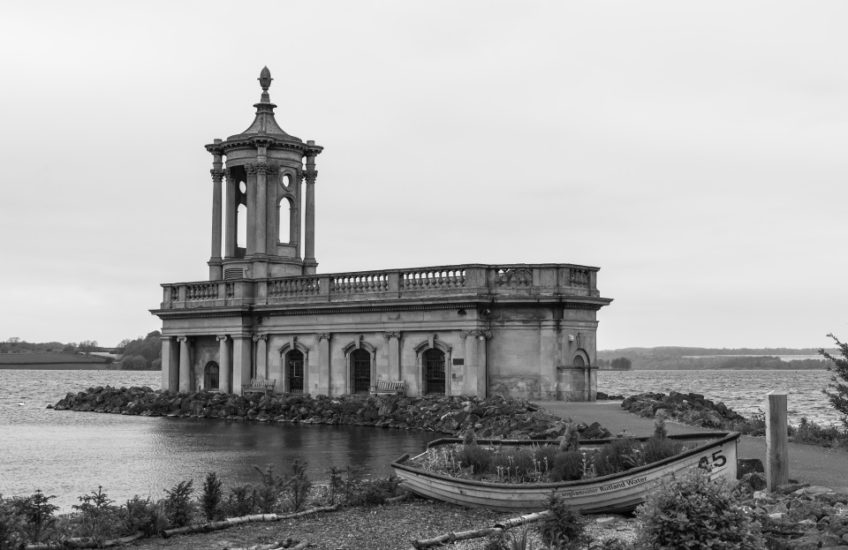 As many of you will know, my intention today was to set off on a 2-day road trip, and I said in my blip yesterday that barring mishap I expected to be home in time to judge your Tiny Tuesday images, but not to remind you to take them. However, if you know me on Facebook you’re also probably aware that mishap did occur, which is why I’m now posting a Mono Monday shot from my desk in Worcestershire, rather than tucked up in bed in a hotel in Bridlington, dreaming of a day out  tomorrow at Bempton Cliffs among the puffins and gannets.

The day started really well, with a conversation with my rheumatologist that was so amicable and useful that I found myself wondering if he remembered who I was, as I emerged with a Chupa Chups lolly, a smiley-face sticker and a friendly pat on the shoulder. The more I think about it, the surer I am that he didn’t recognise me……

Whatever, I then set off northwards to Rutland Water with the specific intention of finding and photographing Normanton church. I’ve never been to Rutland before, and I was rather taken with it; Uppingham is especially pretty (as is Rockingham, just over the border in Northamptonshire), and though both of them are very keen on their speed limits they have light-up signs which congratulate and thank you for sticking to them, which I found surprisingly charming. Rutland Water has several nature reserves, one of which has nesting ospreys, but because I hadn’t been able to get away from Stratford until lunch time I didn’t feel I had time to go there today, and simply made straight for the church.

The story behind this building is that in its original form it was the parish church of the village of Normanton; but in the early C18th a large part of the village was cleared so that the local nobility could enclose an estate, and they then used it as their private chapel, refashioning it in the classical style to make it more elegant. In the early C20th the family moved, the estate was divided up and the church fell into disuse. However in the late 1960s, when the local authority decided to flood the valley to create a reservoir, their plans to demolish the church came up against fierce local opposition; it was clear that the church was going to be half-submerged, but a a creative solution was devised to preserve it, a trust was set up and private money was raised to fund the work. The lower part of the church was filled with rubble and a new concrete floor was put in above the water level, with a rubbled embankment around the building and a causeway linking it to the shore. It’s now used as a venue for civil weddings and is very popular – if you do an image search you’ll find many wedding photographs among them.

I would – obviously – have liked better light for my own photos, but even in today’s murk I found the place beautiful and really quite moving. I must advise you though that if you’re inspired to hold your own next wedding here, you should plan to wear a nice thick coat – it was absolutely perishing, and a dog walker I chatted to confirmed that this is a pretty normal situation for Rutland Water. While I was there a movement out on the reservoir caught my eye, and when I got the 7D and long lens out of my bag and checked, it turned out to be a solitary grebe; the photo I’ve put in as an extra will give you an idea of how choppy the water was on a day when the BBC stated that there was very little wind across the bulk of the country. 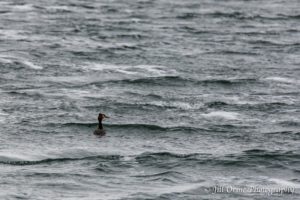 Leaving Normanton, my satnav told me that I had 137 miles to go to my next destination, which was supposed to have been Flamborough Head lighthouse, just north of Bridlington where I’d booked a hotel room for tonight. I zoomed up the Great North Road quite happily, but just as I was turning onto the M18 towards Hull the car pinged at me and an impenetrable symbol lit up on the dashboard. Because of hands-free technology I was able to phone home and describe it to R (who used to own a Mazda), and though he was able to tell me that it was a tyre pressure warning light, and probably not significant if the car was still steering properly – which it was – we agreed that it would be sensible for me to take an early opportunity to at least check that I hadn’t got a slow puncture.

Which is how I came to stop at a service station in Howden (only about forty miles from my destination), whence I was departing when a woman in a large Fiat backed out of a parking space and broadsided me. I’m not sure which of us was more shocked: me at seeing this event unfolding and being powerless to prevent it, or she at having her backward progress rudely interrupted by something she quite clearly hadn’t seen at all. She apologised profusely and took immediate responsibility, which effectively defused my about-to-be-explosive wrath – but it was quite clear that the MX-5 and I were proceeding no further. She even sweetly offered to let me wait for a recovery vehicle at her house, just up the road, where she could ply me with tea and further apology, but I declined with thanks and waited at the service station for the tow truck.

I think I’ll spare you the tale of my journey home, and go and get some sleep. Tomorrow I have to juggle the three insurance companies which are somehow involved in this situation: I fear it may be quite a long day.