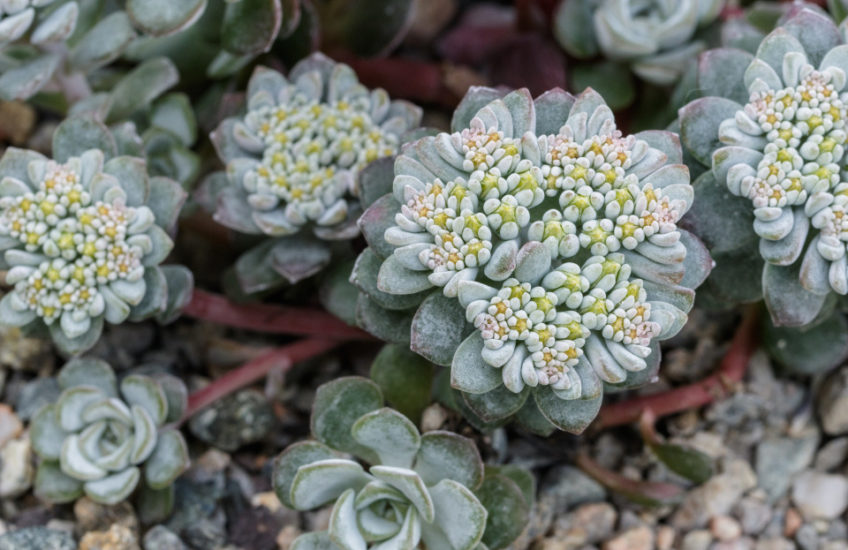 In a move which may have surprised you – because it did me – I’ve decided to take a break from bugs today, even though I have some quite nice bee shots, and post a tiny plant instead. This is Sedum spathulifolium ‘Cape Blanco’, which I recently planted in the smaller of my two old Belfast sinks; you can work out the size by the fact that it’s resting on alpine gravel. I really like the pink-tinged silvery leaves, the smaller of which look rather like little pebbles, and the developing gold flower buds.

After spending much of today making and receiving phone calls about the MX-5, I’m now waiting for it to be collected by the repairers, and for someone else to contact me about a courtesy car. It’s all been hugely frustrating, and my mood hasn’t been improved by the fact that the stress has brought on an arthritic flare – but I keep reminding myself that much worse things happen, and that the most important thing is that no-one was injured. I was reminded of what I might have been doing rather than sitting at my desk with a phone to my ear, by this lovely shot of a gannet which AH14 posted after visiting Bempton Cliffs today. One day…!

For the record, today was the day when Donald Trump fired the Director of the FBI. It remains to be seen whether this turns out to be Trump’s peak Nixon moment, or whether he’ll get away with firing the man who’s investigating him for criminal activity and inserting a stooge in his place. We live in very strange and rather alarming times.