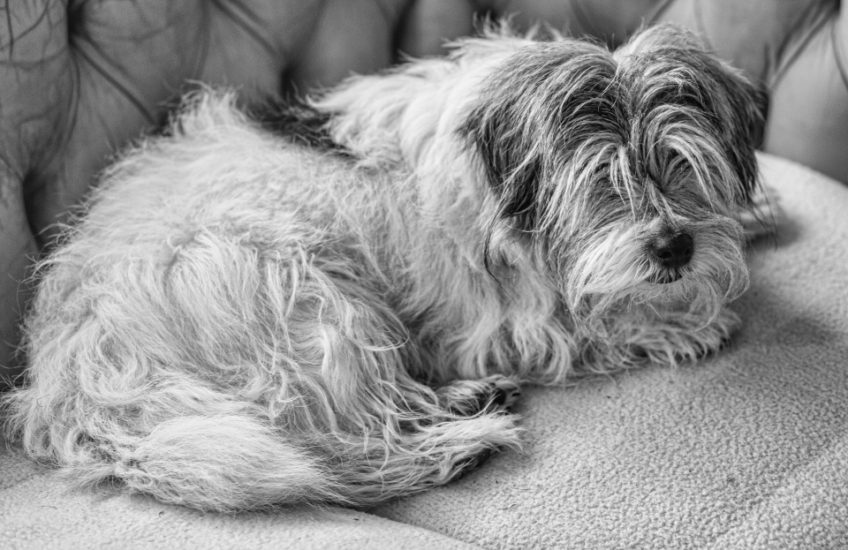 My 5DMkIII arrived this morning. I wouldn’t describe ploughing through its 400-page manual and trying to set up its many, many functions so that the operation is at least vaguely familiar as being exactly fun – but I’m lucky to be able to buy a new camera, so I’m not complaining! I finally reached the point at which I thought I might risk taking some actual photos at about 4pm, by which time it was raining quite heavily. I took half a dozen shots indoors, of which this was the best – so though it’s not the actual first photo from my new camera, it’s the first one I’ve kept.

Roley isn’t generally worried about having his photo taken, but he doesn’t like things being different to the way he expects them to be, and the 5D makes a different shutter noise to the 70D. He did not care for it. He will get used to it eventually – but on the evidence we have from the last time we bought a new dishwasher, it will probably take a year or so.

If anyone reading this has the 5D, I’d be glad to hear your thoughts on the many different ways in which you can set up AF, and what in practice you’ve found to be the most useful – especially if you photograph moving things such as wildlife. The 61 AF points were a big draw for me with this camera, but I suspect that learning to harness them to best effect is going to require some trial and error. Probably quite a lot of error. It was only yesterday evening that I read someone on Facebook stating that after owning it for 2 weeks she hates this camera, because only about 20% of her images are sharp, and I suspect this is probably because of the focusing system being very different to what she was used to before. I’d prefer not to follow her down the road of Buyer’s Remorse, if at all possible, so any pointers would be gratefully received.

The weather forecast for tomorrow isn’t great, but I’m hoping to get out for a while and do some more practising with my new toy. As and when I’m reasonably confident that I know what I’m doing with it, I’ll be sending the 70D off somewhere to have its sensor cleaned – at the moment it looks as though I’ve been eating my lunch off it!