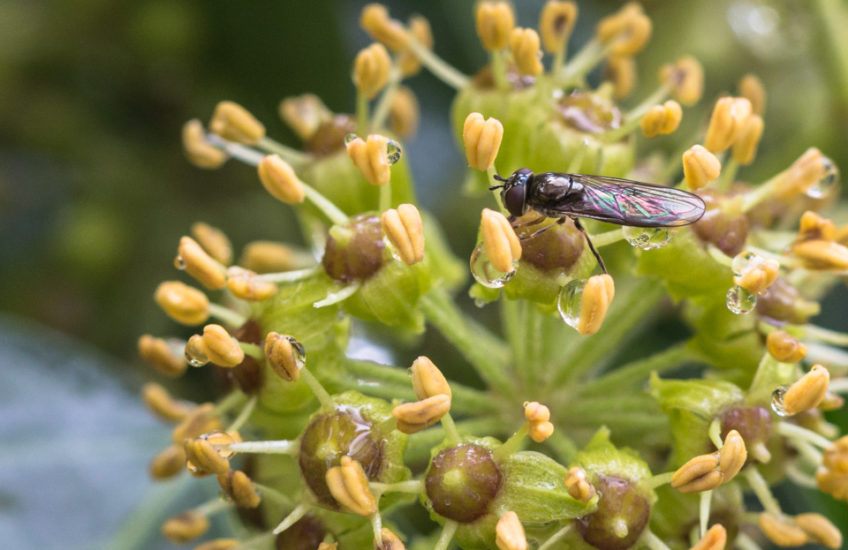 I managed to get the dogs almost round their morning walk before the rain started – but once it began, it didn’t let up until mid-afternoon. The new camera is weather sealed, but my lenses aren’t and neither am I, so I had to wait till the weather cleared to get out in the garden.

When I first approached the flowering ivy it was dripping and still deserted, but within a few minutes some tiny flies arrived; then this hoverfly; then within another few minutes some honeybees. And the garden spiders checked and repaired their webs, and waited…

I took about 90 shots around the garden over half an hour, and having uploaded and edited them I’m reassured that the 5DIII was a good buy – which is a bit of a relief! All of my shots today were taken with the autofocus set to single-point spot – given that I was using a 31mm extension tube the depth of field was so shallow that there really wasn’t any point trying anything more complicated – but even so it managed to pick up this hoverfly in flight, as you can see in the extra. I’m also very pleased with its low light performance – the ISO was quite high in some of my shots, but I haven’t felt the need to smooth them because they’re really not all that noisy. The biggest difference from the 70D is how responsive the shutter release is: I startled myself a few times by taking shots before I was ready, but by the time I finished my session I’d started to really appreciate the easy operation of the camera. Hillyblips and Subjunctive told me I’d love it, and I have a feeling they’re going to be right! 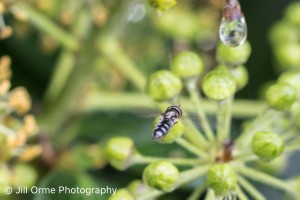 Of the images I kept, R chose this as his favourite. I haven’t had the identification confirmed yet, but I think she’s a Platycheirus albimanus – she was certainly small enough to fulfill today’s brief, being only about 8mm long. I was a little worried about her at one stage because she seemed to get trapped in a water droplet, but in the end she managed to free herself. If you compare this shot with Sunday’s, taken on the same plant, you can see how small she is compared with a honeybee.

Speaking of R: he had a rather exciting drive to work this morning. He was going north on the M42, and at the point where the motorway splits for the M6 Toll he was in about the third lane of six, when something on his near side caught his eye… and turned out to be a detached wheel. He said there was nothing for anyone to do but take their feet off their accelerators and wait to see what it would hit. It glanced off one vehicle, but missed everything else as it crossed the entire carriageway, then hit the central reservation – but incredibly luckily, rather than ricocheting back into the traffic it caught on something and stuck there. I’m not exaggerating when I tell you that I listened to this story with my mouth hanging open – my brain shies away from imagining how that could all have turned out. By the way, he didn’t see the vehicle that lost the wheel, so I hope the driver of that one is OK too.