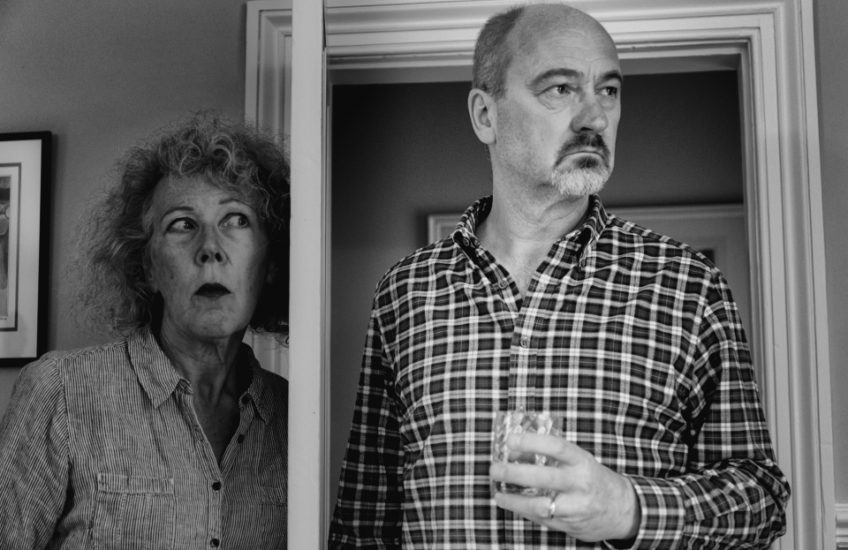 For reasons I don’t quite understand, R wasn’t keen to come down to the local station with me today and make like a husband who’s just been pushed off a train. You simply can’t get the staff.

In fact he wasn’t initially noticeably excited at the prospect of appearing in this blip at all, but once I’d set up the camera on a tripod, and he’d set up an iPad on the coffee table with this still as a reference point, he began to get into the swing of the thing, and like the old trouper he is he hit his mark and his pose identically for every shot. I didn’t – in fact it took a good dozen shots for me to get even close to where I wanted to be – but to be fair, I was handling the camera, and having managed to mislay my infra-red remote shutter doofie and with the camera too far away for a cable release to stretch, I kept having to press the shutter on a timer and then scuttle back over to the door to pose.

After we’d achieved something close to what I wanted, I went off to process the shot and then realised that it was spoilt by both of us wearing our glasses and me having no make-up on. So out came the slap – including some dark red lipstick I’m hanging on to just in case the 1980s ever come back round – and then off we went again. This time we hit it in one – at least, R looked at the back of the camera and suggested that it was pretty good and we ought to quit while we were ahead. Now.

Many thanks to Dollykgray for hosting what is proving to be a head-scratching month of challenges: I gather that next week we’re all going to be running through Vienna’s sewers, and I’m looking forward to that already. I feel I should say right now though that if she sets Vertigo, I’m opting out.

In other exciting news, an armoured van arrived at the house this afternoon, with several armed guards riding shotgun, and delivered my new passport. It’s possible that I made some of that up. However, what is true is that the delivery chap had to take a photo of the front door, and fill in a form saying what colour it was, what colour the letter box was, and whether there was glass in the door and if so what type of glass. He then asked R, who was standing waiting to accept the delivery, for a fingerprint – which R was almost ready by this time to believe he was going to have to provide – but it turned out that this was just a little joke, and all he actually needed was a signature.

When I opened the passport and flicked through it, I found a small yellow label stuck to one of the pages, bearing the somewhat Dodgsonian legend Please remove this label. Having been raised on Alice in Wonderland I complied, and on turning it over I discovered what looks like micro-circuitry on the adhesive side. Of course, my imagination is now working overtime on this; possibilities which have occurred to me include the following:

1. It’s a self-destruct device, in case the passport is stolen en route to its rightful owner; HM Passport Office, assuming that criminals are either too illiterate or too contra-suggestive to find, read and obey the instruction to remove the label, have given themselves the ability to trigger the device remotely and explode the passport;

2. It’s a tracking device, in case ditto; HMPO are now tracking my desk.

3. It’s a bug: R and I have signed so many fuming petitions against various bits of Government policy over the past six years that we’re now on an MI5 watch list. Just to be on the safe side, I think I’d better microwave it.

If you don’t hear from me again, please assume that I’ve been arrested, and send chocolate. Green & Black’s Almond is my favourite.