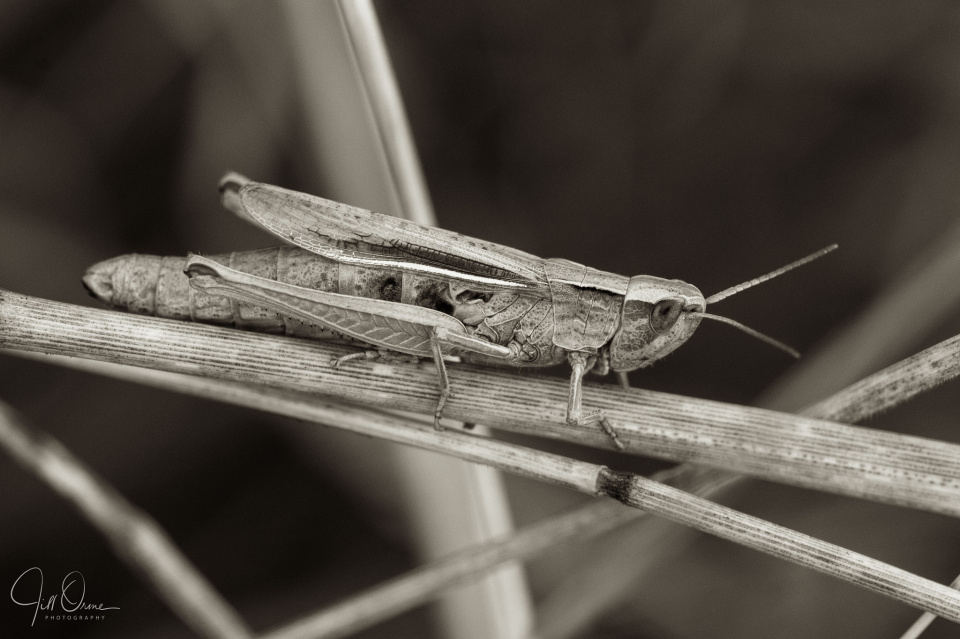 I was in two minds whether to post a mono conversion today, or to show this grasshopper in her natural and rather stylish pink livery; in the end I’ve decided that she works quite well for the Mono Monday theme, so I’ve posted the original photo to Facebook, if you’d like to see it.

Pickings on the bug front were distinctly thin today, except for the grasshoppers that were pinging around the butterfly field – and they were, as ever, intent on not being photographed. But I enjoy the challenge of trying to home in on them with the macro before they manage to leap away, and having done that, trying to get the camera reasonably parallel to them, and without any foliage cutting across the shot. Well – I say enjoy…. it kept me occupied for a while, at any rate!

This is a Lesser marsh Grasshopper; the side-keels of the pronotum (the shoulder plate that covers the thorax) are almost straight, and the wings are fairly long but don’t reach the end of the abdomen. The genitalia of this species aren’t very distinct to the amateur eye, but I’m confident that this is a female because of the slight bulge on the edge of the forewing, which is only seen in females.

She’s not, of course, actually balanced on this grass stalk, but is gripping it quite firmly with her claws. But balance is important to grasshoppers when they’re leaping, especially when they feel threatened and make a series of jumps, only landing momentarily and then springing again. I quite often see one miss its landing and fall, though they usually manage to catch onto a different surface, rebalance, and jump again, but a few weeks ago I saw one fail to land properly and fall into a spider’s web. I was saved from making the decision as to whether I should or shouldn’t intervene by the speed with which the spider shot out of her layer and bit the poor creature; the struggle, such as it was, was over within a couple of seconds. Having the leisure to look at it closely as it lay helpless, I realised that it was missing one of its hind legs, and this no doubt contributed to its fall.