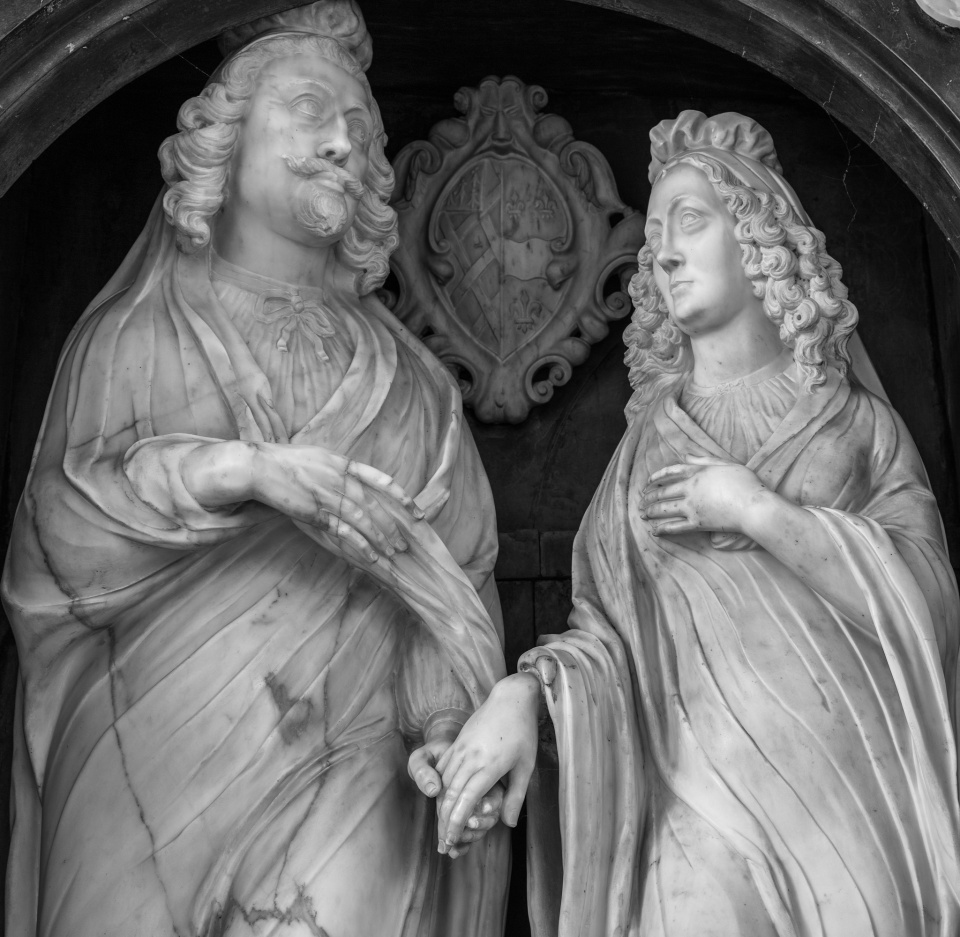 These are not my ancestors: if they were, I would probably have a dedicated lens room, which would only be smaller than R’s dedicated guitar room by virtue of the fact that lenses are (mostly) smaller than guitars. But they are someone’s ancestors, and their monument in the Parish Church of Chipping Campden has a slightly unusual story attached to it.

In the south-east corner of the church is a family chapel called the Gainsborough Chapel, beneath which is a family vault containing the remains of various members of the Hicks and Noel families. The entire centre of the chapel is occupied by a humongous monument to Sir Baptist and Lady Elizabeth Hicks, a detail of which I blipped here, and round the walls are memorials to other members of the family. This is part of a wall-mounted monument to Juliana Hicks, daughter of Sir Baptist and Lady Elizabeth, and her husband Lord Edward Noel. When Sir Baptist died he had no male heirs, and the King allowed the baronetcy to pass into the female line so that Sir Baptist’s daughter and son-in-law became Lord and Lady Campden.

Edward Noel repaid this favour by enlisting for the King in the English Civil War, and died at Oxford in 1642; Juliana outlived him by nearly forty years, and had this monument erected in the church soon after the Restoration of the Monarchy in 1660. It shows the couple emerging from their tomb at the Day of Judgement, hand in hand and with their coronets on their heads. Until her death the door on Juliana’s side was closed, concealing her statue, but since then both doors have stood open.

The door on the left bears this inscription:
This Monument is erected to preserve the Memory and Portrait of the Right Honorable Sr. Edward Noel Vicount Campden, Baron Noel of Ridlington, and Hicks of Ilmington. A Lord of Heroik high parts, & presence. He was Knight Banneret in the Warrs of Ireland being young, and then created Baronet Anno 1611. He was afterwards made Baron of Ridlington, the other titles came unto him by Right of Dame Juliana his wife who stands colaterall to him in this Monument. A Lady of extraordinary great endowments both of Vertue and Fortune. This Goodly Lord died at Oxford at y beginning of the late Fatall Civll Warrs whither he went to serve & assist his souvuerain Prince Charles the first. And so was exalted to the Kingdome of Glory 8º [i]Martii[/i] 1642.

[All spellings are as transcribed, except that I have replaced some instances of ‘v’ with ‘u’, and ‘i’ with ‘j’. I have also added some extra punctuation in place of line breaks, to make the transcription easier to read.]

It’s interesting to note that although it is commonly said that Noel died at the Battle of Oxford, the monument doesn’t claim this – and in fact there was no battle at Oxford in 1642. The first fighting of the war was at Worcester in September 1642, and the first major battle was at Edgehill in Warwickshire in October. So the cause of Noel’s death is a mystery.

The exposed inner surface of the other door carries this inscription:
The Lady Juliana. Eldest daughter, and coheire (of that Mirror of his time) Sr. Baptist Hicks Vicount Campden. She was married to that Noble Lord who is here engraven by Her. By whom she had Baptist Lord Viscont Campden now living (who is blessed with a numerous & gallant issue). Henry her second son died a Prisoner for his Loyalty to his Prince. Her eldest daughter Elizabeth was married to John Vicount Chaworth. Mary her second daughter to the very Noble Knight Sr. Erasmus de la Fontaine. Penelope her youngest daughter Died a Mayd. This excellent Lady for the pious and unparallelld affections She retaind to the Memory of Her deceased Lord caused this stately Monument to be erected in her life time in September anno Dom. 1664.

The Church guide book states that all those commemorated in the chapel are buried under it, but I suspect that this doesn’t include Juliana – partly because her death date isn’t given, and partly because by the time she died the family seat had moved from Chipping Campden to Exton in Rutland. Campden Manor had been burned down during the Civil War; in my earlier blip I wrote that it was destroyed by Parliamentarians, but since then I’ve read that the family may have destroyed it themselves to prevent it from becoming a Parliamentarian stronghold.

For those of you not raised on this inglorious episode in English history, I recommend the excellent summary of the situation given by Sellar and Yeatman in 1066 and All That: the King’s side, known as Cavaliers, were Wrong but Wromantic; while the Parliamentarians, known as Roundheads, were Right but Repulsive. Really, that’s all you need to know.