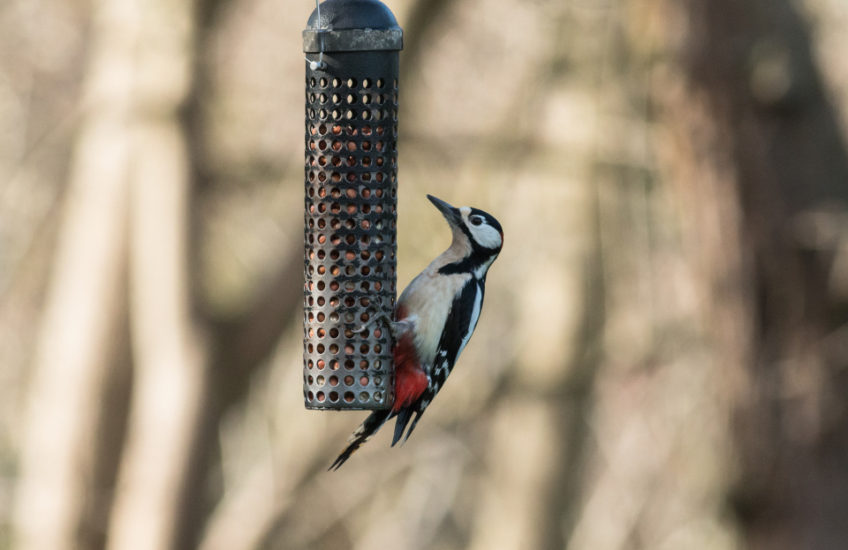 I’ve been pretty unwell today, so I gave myself a quiet day; but because the light was good I thought I should be able to get some nice shots in the garden. I took a few with the macro lens, but it was very windy and I didn’t think any of them would be pin sharp, so I decided to try for some bird shots with the 400 lens on the crop-sensor camera.

The birds are definitely getting used to me being around: I sat in a garden chair on the patio, with the camera on a tripod, and I only had to wait a few minutes before the feeders filled up. I didn’t stay out very long because it was quite cold just sitting, but on a first pass through my shots I had about forty that were reasonable or better. I’ve culled those down to twenty, half of which have gone onto Flickr, if you’re interested.

Almost any of the Flickr set might have been my blip, but I’ve chosen a woodpecker shot because these are the best I’ve ever managed to take of one of these beautiful birds. I love their slightly mad eyes – which always look to me to have worry lines round them – and their huge feet. This is a male – the identifying red patch isn’t very obvious in this shot, but is clearer here. I didn’t realise until I was editing that two different birds had visited the peanuts while I was taking photos: this one is a female.

One of the Flickr shots has a blue tit about to zoom out of the frame, dislodged from a very brief perch on the nut feeder by the female woodpecker, and only just caught on camera by my reflex twitch on the shutter cable as I saw it take off. The interesting thing is that she didn’t attack the blue tit – just stopped eating and gave it a Special Look – but it immediately shot off to a different feeder. Watching the behaviour of these birds has made me appreciate the literal meaning of the phrase ‘pecking order’.