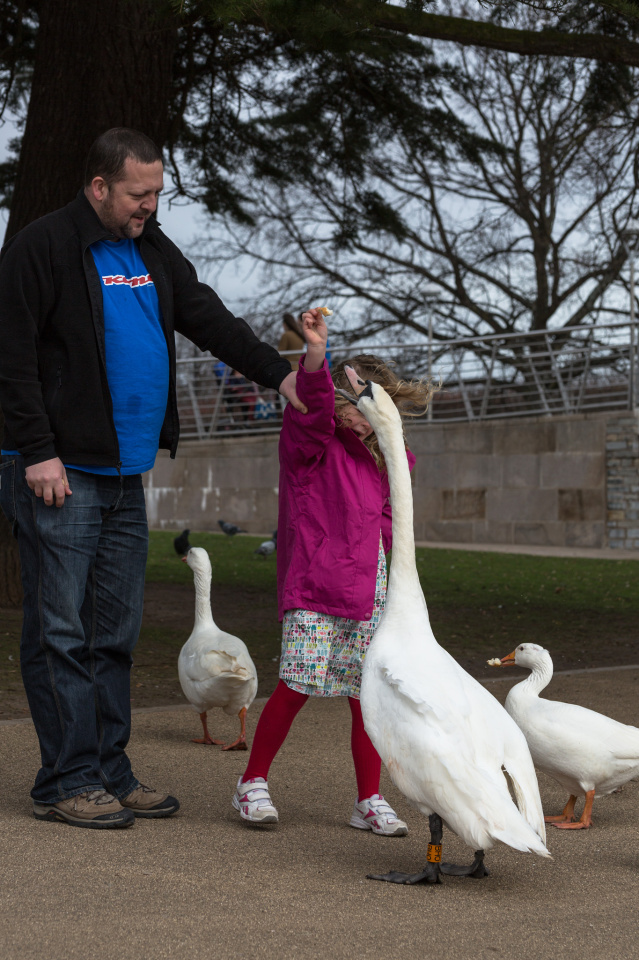 “What a morning I have had. No, really.

So there’s this yooman, right? Dunno his name cos he wasn’t ringed, but that doesn’t matter – he had, like, a crusty baguette – honestly, it was like, this big – and he was sharing it out. So, there’s the usual scrum going on, and I can’t be doing with it, so I get myself out of the river, don’t I, and I wander over, and he’s all like “Look at me, hand-feeding this swan with my crusty baguette.” But that’s OK, I don’t mind a bit of interaction if there’s bread going – you know what I’m like with wheat products – and it’s all very nice and civilised, even if I did have to have a Serious Word with a couple of geese.

But this yooman, he’s got, like, a young with him – female I think. No, I know – they all look the same to me too, except this one had a lot of fur, and I think I’m right in saying that makes it a female. So anyway, this young wants to have a go at feeding the wild animal too – and he only goes and gives her a piece of crusty baguette.

I mean, with me there, already half off my face on inappropriate baked goods: what could possibly go wrong?

I could have said something, I suppose – but really, it’s not my job to do the risk assessments round here.  Nowhere in my job description does it say ‘risk assessment’. Here, look – here’s what it says:

Nothing about assessing any risks, right? So I don’t say anything – I just go for the crusty baguette, don’t I? Like anyone would. And then it all goes a bit pear-shaped, and suddenly there’s all this wailing going on, and I’m getting blamed for stuff.

On the plus side, I’d already had most of the crusty baguette.”