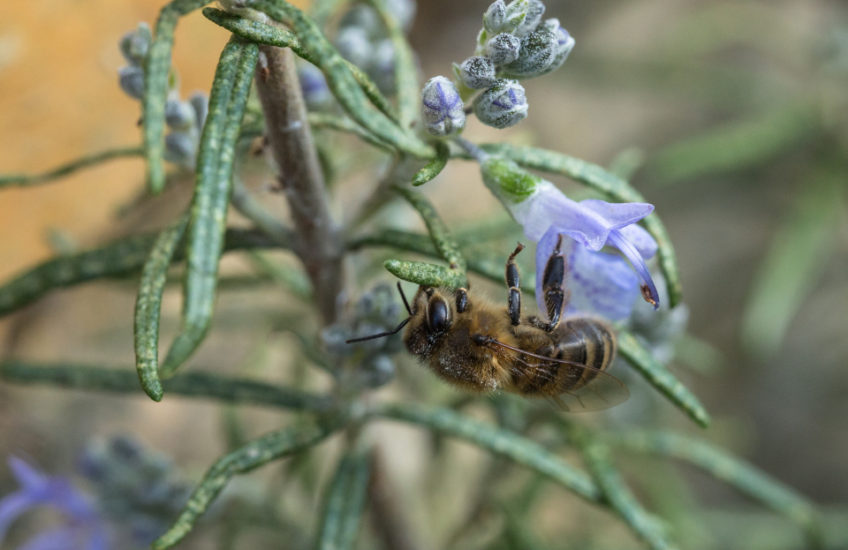 That’s the name of the shrub, of course, not the bee – though now I’ve thought of it I rather like Rosemary as a name for a bee. I had originally written that this idea wouldn’t work because this isn’t a queen – but happily BKeeper has now told me that even so this bee is a female. So there you have it: Rosemary the Bee.

I spent quite a bit of this morning finishing my editing from yesterday, and it was lunch time before I went out in the garden with the camera to look for today’s shot. The light was quite good and it was reasonably warm, so I just pottered about, snapping things that appealed to my eye.

I was bending down with my head and the camera in a small berberis which is almost-but-not-quite flowering, when an angry buzzing noise started very close to me. I quickly stood up, but the bee I had disturbed and annoyed flew at me a few times before losing interest and disappearing. I’ve never been frightened of bees, but I do treat them with respect – especially when I remember that Child Two still harbours a small grudge towards me, twenty years after I told him that a bee wouldn’t sting him provided he left it alone, only to have it promptly prove me a liar.

On my way back to the house I walked past the rosemary, and it occurred to me that while I had a macro lens on the camera I should take a quick look for rosemary leaf beetle. Not that I want to discover my shrub infested with a pest, you understand – but they are very photogenic. No stripy iridescent beetles were to be found, but there was a lot more buzzing, caused by about half a dozen honey bees working the rosemary flowers.

Over the course of the winter I’d forgotten how tiny these bees are, and how fast they can move. I also have to get used to pursuing them with a macro lens, which is a much larger instrument than the combination of short prime and extension tube I used last summer, and doesn’t have the limitation of a very shallow focal range. It was hardly a surprise today to discover that bees really don’t care for it when you get so close with the camera that the lens hood flicks the shoot they’re feeding from and dislodges them – but luckily even then, the rosemary was more interesting than I was.