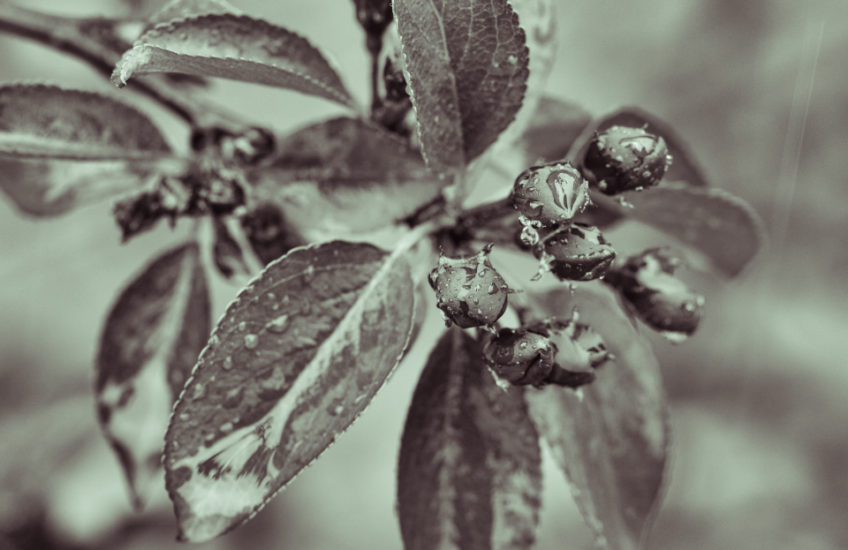 Or in this case, a wet beginning.

I woke this morning, and thought “Gardening!”

Then I opened the curtains, and thought “Or then again – maybe not.”

It was heaving down; and it has rained relentlessly through most of the day. When I took Arthur out this morning in what had seemed to be a let-up, we made it all the way to the front gate before it started spotting on us. Arthur stopped dead and stared at me in evident outrage that I should think it appropriate to take an elderly hound outside in such inclement weather – and to be fair, I could see his point.

Forced to devise wet play activities, I returned to a project I started a couple of years ago, which is to digitise all our old family photos. I sat at my desk cleaning up scanned image files until my eyes were scratchy and sore, and then thought that it really was gone time I tried to take today’s photo.

It was still tipping down….

I made some tea and sat in the kitchen reading last weekend’s newspapers, with one eye on a large puddle on the patio, waiting for the downpour to ease a little.

Made some more tea.

Watched Escape to the Country.

Wondered why no-one has ever thought of making a programme called Escape from the Country.

Drank another mug of tea.

Eventually, with no sign of the monsoon easing, I gave in, put on waterproofs, shielded the camera as best I could, and bolted across the yard to photograph the buds on my crab apple tree, which I’d already decided would fit this week’s Mono Monday challenge. Five minutes later I was back in the house with half a dozen reasonable shots, and the kettle was on for more tea.