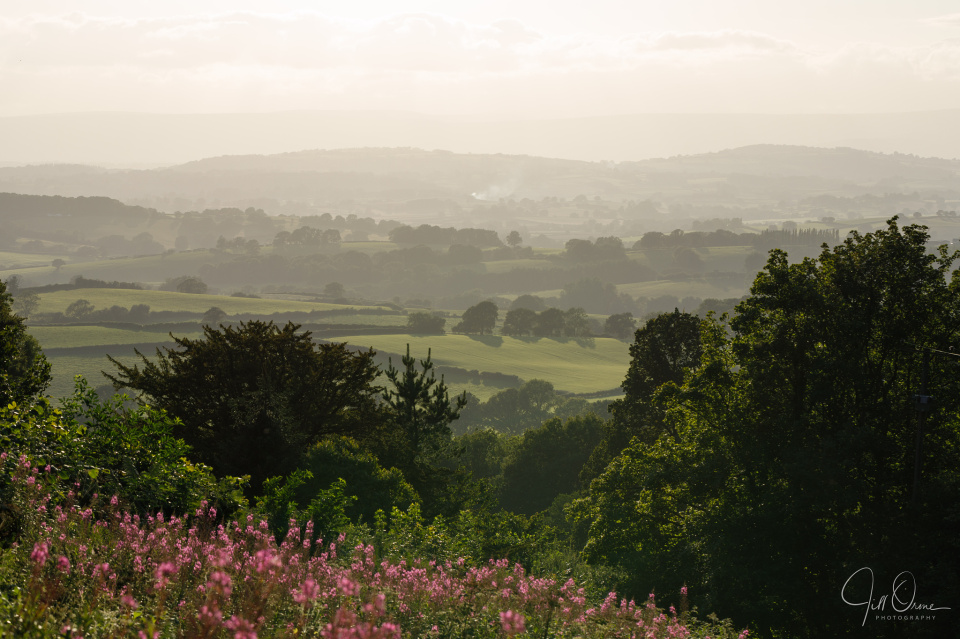 This is the view from the meadow below our holiday house. I’ve shot it in all kinds of moods over the course of the week, but as I walked through the meadow (sadly mown since I last saw it) to fetch my car from the village hall car park after dinner this evening, I still let out an involuntary “Wow!” when I reached the gap at which this vista suddenly appears.

I was only carrying a camera because I’d hoped for a late insect, and without either tripod or filters to hand I didn’t faff around but took just a single frame with the macro. I started by working it up quite heavily, to bring out detail in the sky and the receding hills, but it lost more than it gained: with minimal processing you get a much better feel of what it was like for me standing there, almost dazzled by the sinking sun.

Looking almost due west from Llanishen, what you’re seeing in the distance are the Brecon Beacons – Pen y Fan, the highest peak in Wales outside Snowdonia, is just 40 miles away by road, and considerably less as the crow flies. Somewhere within those layers of recession are the South Wales Valleys; Brynmawr and Ebbw Vale lie almost directly between Llanishen and Pen y Fan.

R’s grandfather used to say that the primary benefit of going on holiday was in making you appreciate home, but while it’s true that I’m looking forward to getting back to the Shire tomorrow, at the same time I’m sad to be going. I love Monmouthshire, and I hope it won’t be too long until we pay our next visit.