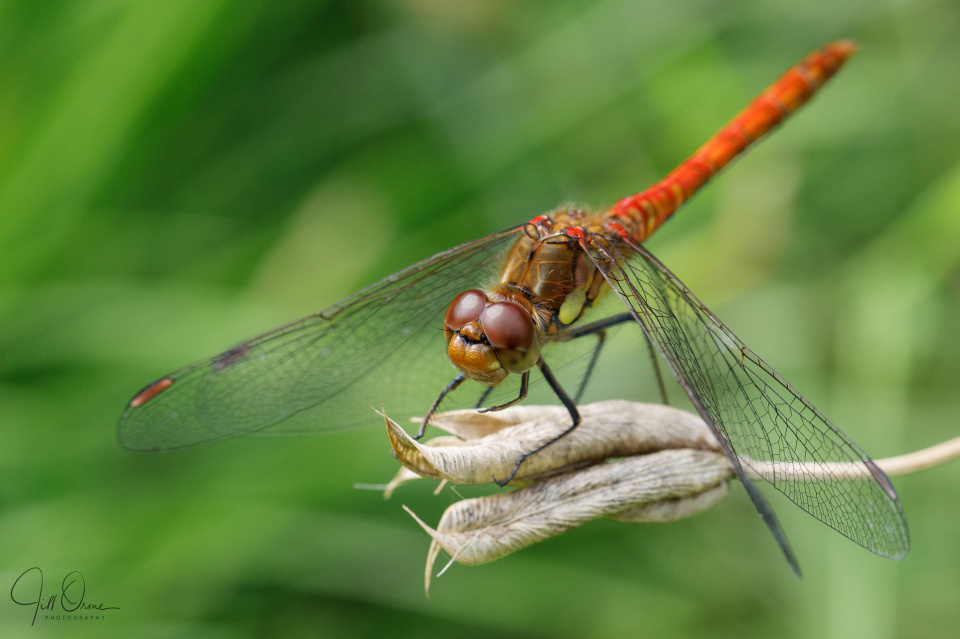 R and I were back at home before midday, and after a couple of hours of unpacking and putting things away I wandered out into the garden to see what might be about. Almost immediately I managed to put to flight not one but two Common Darters, a female and a male, which had both been resting on foliage in the pear tree bed. In my defence, Common Darters are not at all common in this neck of the woods, and the first time I ever saw one in our garden was last summer; I’m choosing to take this as further evidence that the installation of our two small ponds was an Extremely Good Thing.

The female of the pair was skittish, and wouldn’t let me approach too closely. Luckily the male was quite bold, and apparently very fond of this particular seed head, and though he took off a few times when I pushed my luck, if I retreated a little way he would circle and come back down onto the same perch. Realising that the background to this scene was rather messy, I ditched my usual macro aperture of f/11 (and with it, any hope of stem-to-stern sharpness), and concentrated my focus on his face. This is good enough to be worth viewing full-screen, if you have the time.

Today was R’s birthday – he’d very much like me not to tell you which one – and this afternoon we went into Stratford to buy something appropriately festive for dinner. Down at the river I spotted and photographed a patrolling Migrant Hawker, which was my 28th Odonata species of the season and put the cap on a very happy homecoming.