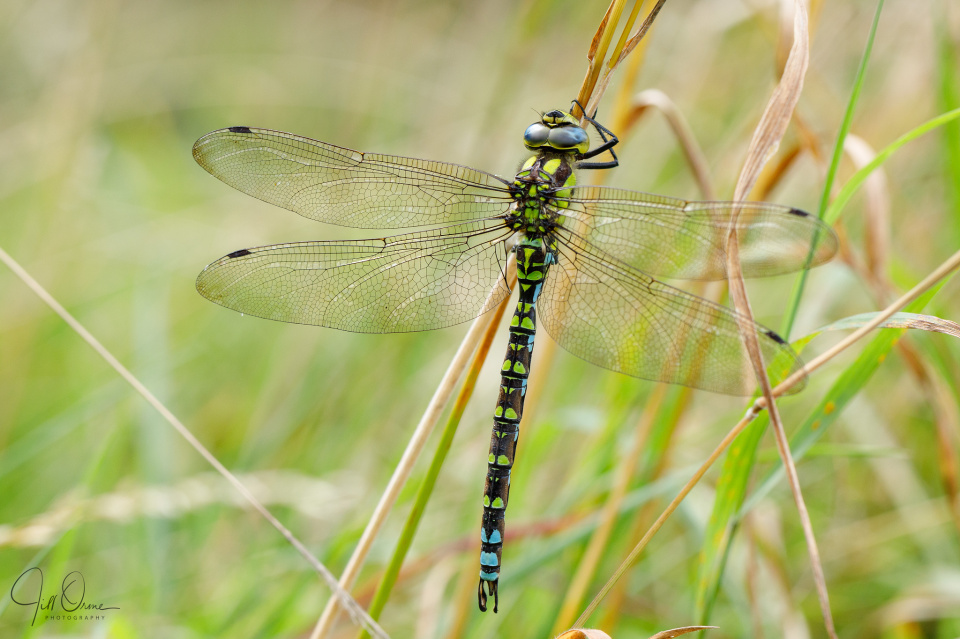 When you look at this image, it probably wouldn’t immediately occur to you that Southern Hawkers are highly camouflaged insects, but they have the amazing quality of being able to blend in with almost any foliage. I was walking through Tilly’s field in search of Odonata this afternoon, and knowing that dragonflies like to perch on the blackthorn hedge in the sheltered north-eastern corner of the field, I approached it very slowly and edged along it cautiously, searching intently. But still… I didn’t see this one until I put him to flight, and when he took off from only a couple of feet in front of me I jumped as if I’d been stung.

I watched as he flew a couple of hunting loops, and then tracked him to rest in the grass. Then it was a question of approaching slowly, shooting as I went, until I got to within about a metre, which was when I captured this image. He didn’t react until I attempted to lay down in the grass to get a better angle: dragonflies respond to movement more than anything else, and as I’m not myself a creature of stealth I was simply too clumsy about it, and spooked him.

The next time he came down it was on a self-sown blackthorn sapling a few metres away. I crept after him again, and was able to get some more photos, but once again I got too close and he removed himself. This time he went back to the hedge, and to my astonishment, as I watched him fly along it looking for the perfect perch, he put up a second male Southern Hawker that I hadn’t previously noticed. If they hadn’t both decided to move, I could have been in the field with them all afternoon and never seen them at all.