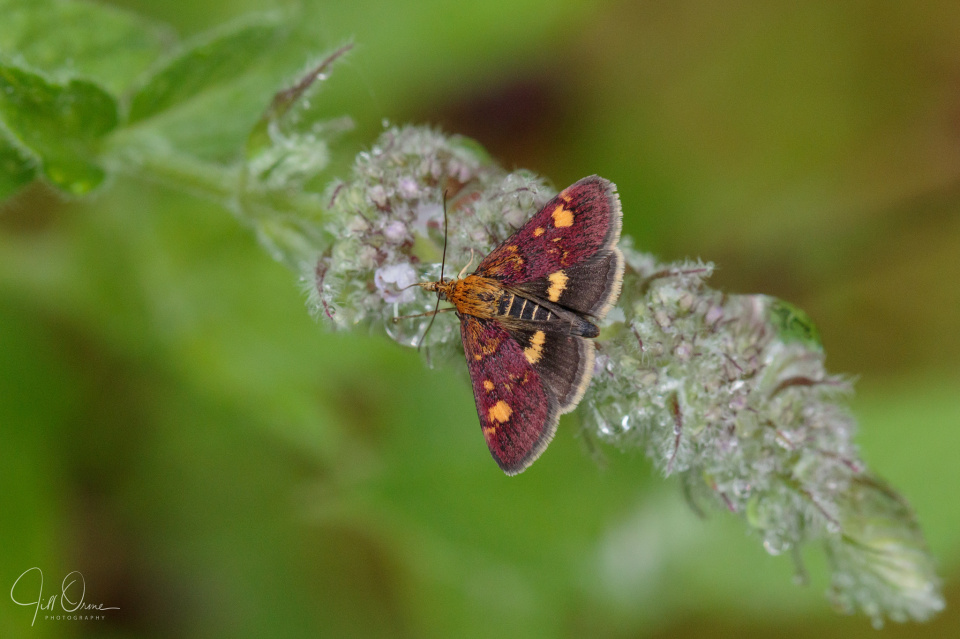 It was a day for watching the rain falling outside the kitchen window and being glad that I didn’t have to water the garden after all; for making a large batch of lamb dhansak in the slow cooker; and for trying to catch up on a backlog of paperwork and photo processing. It was also a day when I photographed three nectarines on a backdrop in the conservatory, because I didn’t think I was likely to be able to get an outdoor image, while moaning about the fact that it’s still August but the summer seems to be petering out already.

And then I saw that the sky had lifted a little, and the rain had reduced to an unenthusiastic mizzle, and I grabbed the macro and scuttled off outside. By the time I’d snapped some wet flowers, both the weather and I had cheered up quite noticeably, and when a few invertebrates began to venture out of their shelters in search of food I felt that order had been restored to the universe.

There are two very similar species that are both commonly called ‘mint moth’, and I’ve recorded both of them in my garden, but this (I think) is Pyrausta aurata, which the commoner of the two. Its larvae feed on the foliage of a range of mints and sages, as well as thyme and oregano, and as you can see here the adults like mint nectar too, though I also find them quite often on other flowers such as yarrow and tansy. P. aurata gives the impression of having a long flight period, but actually goes through two generations per year, the first being on the wing in May and June, and the second in July and August. Its wingspan is a little under two centimetres.