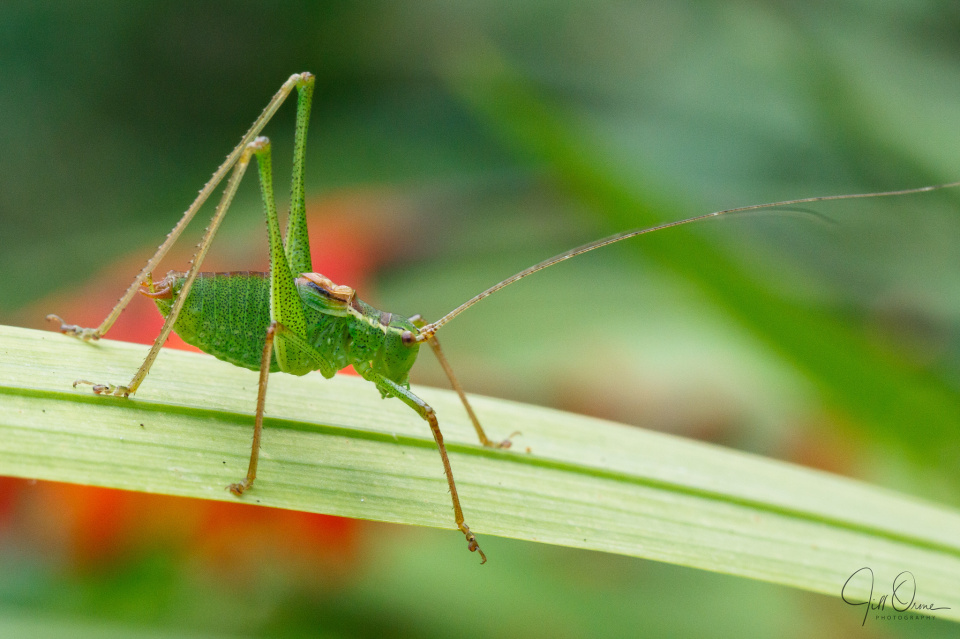 “Stay here and stare at him while I fetch the macro,” I instructed R. “It’ll stop him moving.”

When I arrived back at the montbretia patch, rather than having the cricket transfixed with a steely glare, R was shuffling his feet like Topo Gigio and apologising for the fact that, having taken his eye off him for just a moment, he’d lost sight of Mr Speckles, and now didn’t know where he’d got to. Honestly, you just can’t get the staff. Luckily though, it transpired that he’d gone nowhere, and better yet, there were actually two of him, one of which wasn’t standing knee-deep in cricket poo. It’s the second specimen that you see here.

Speckled Bush Crickets are common throughout England and Wales and up into the Scottish Borders, and are found on scrub land and in hedgerows and messy gardens like mine. They’re between one and two centimetres in length, not counting the ridiculously long legs and antennae. This is a male, as you can see from his short, curved cerci; females have a very obvious, upwardly curving, scythe-shaped ovipositor, which is six to eight millimetres long. They’re herbivorous, feeding on a range of plants including nettles and brambles.

The season for adult Speckled Bush Crickets runs from July to November, during which time the females will deposit their eggs in the bark of a range of trees and shrubs, or in plant stems. The eggs overwinter and then hatch in the spring, with the first nymphs appearing around May and passing through six instars to reach adulthood. Adults are most active during warm nights, when the males will rub their wings together to attract females, but the resulting ‘chirp’ is too high-pitched to be audible to humans.