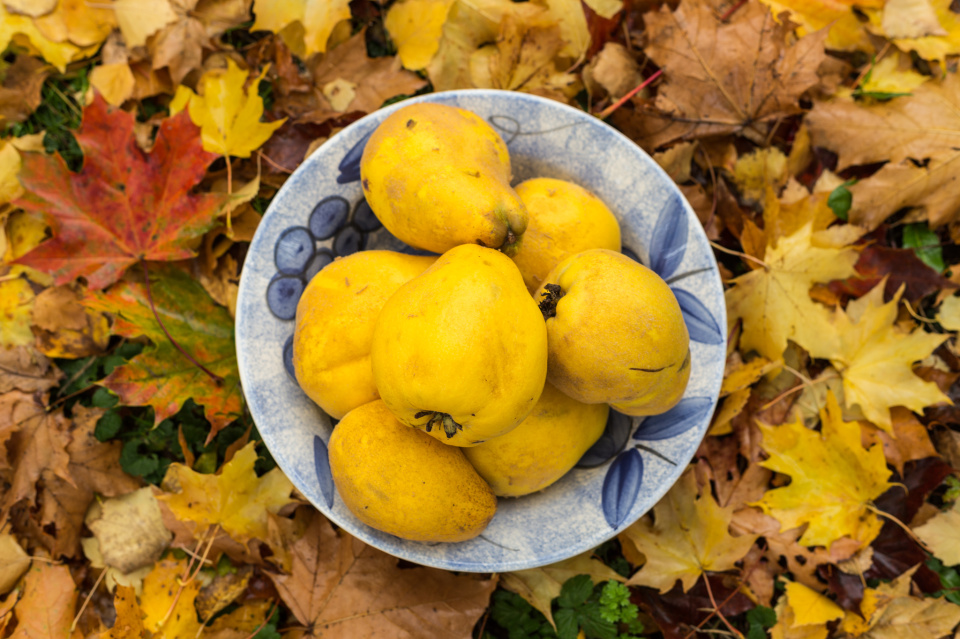 Our previous house came with a scrubby field, described in the estate agent’s blurb as a pony paddock though it wasn’t actually large enough to sustain a pony. In any case we didn’t own one, so we planted a number of trees on the land – mainly fruit trees, but also some broad-leaved ornamentals, most of which thrived. The one which definitely was not happy was a quince, and by the time we sold the house and moved it was still doubtful that it would actually take.

I’m not sure at this distance in time why I wanted a quince tree, as I had never even tasted quince – I suppose that like most of my better ideas, it probably came from a book. Anyway, shortly after our arrival here at the Money Pit I sourced another quince sapling, and R planted it for me down in the wild garden, quite inadvertently siting it in the ideal spot to make it love its life. What we didn’t know at the time of our first quince experiment twenty years ago but do now is that quince trees like damp soil, and we happened to place this one in the path of a soakaway that drains through our land to the brook in the centre of the village. So the second tree thrived.

In 2004 we took a family holiday in Barcelona, where we enjoyed some outstandingly good meals – several of which included a plate of sliced Parmesan and Manchego cheese, served with a thick fruit paste called dulce de membrillo. My excitement at discovering that I was finally tasting quince was exceeded a couple of years later when our own tree began bearing fruit.

Like many fruit trees the quince tends to have “on” and “off” years. Two years ago ours produced so much fruit that after making dulce de membrillo, quincemeat, quince brandy and quince schnapps, and cooking and freezing quite a large amount of quince puree “for later”, I simply ran out of steam, and just put the remaining fruit in a basket on the garden wall with a sign saying Please help yourself.  Last year was a rest year, and we harvested just two fruits. This year I wasn’t optimistic about a good crop because we had some late frost which took off much of the blossom, followed by an unusually dry summer; but despite these setbacks the tree has produced these, along with some windfalls which the slugs found before we did, and still has a few fruits left to shed. They’re huge, by the way, so I have more than enough to make a fresh batch of dulce de membrillo. If you have a tree or are able to source some fruit from a farm shop I thoroughly recommend you to try it; this is the recipe I use:

Scrub the quince skins clean but do not peel or core – simply cut into large chunks and place in a large heavy-based pan with the water and the lemon rind and juice. BTB, then reduce the heat to low, cover and simmer for about 45 minutes until the quinces are very soft. Stir a few times to prevent the pulp settling and sticking on the base of the pan.

Place a jug under a jelly strainer or a muslin-lined sieve, and pour in the contents of the pan. Leave to strain for about an hour until the pulp is relatively dry, but do not squeeze it. Set the liquor on one side for use later.

Put the quince pulp through a food mill or the milling attachment of a food processor (or at a pinch you could rub it through a sieve, though that would be pretty hard work). When you’ve separated out the flesh pulp, weigh it and place in a clean pan with an equal weight of sugar (I had about 860g from 1kg of quinces).

Put the pan on a medium flame and stir constantly till the sugar dissolves. Bring to a very low simmer and cook until the mixture thickens. NB use EXTREME CARE at this point!! If the mixture bubbles and gloops you are likely to get a 2nd degree burn – it’s the culinary equivalent of napalm. It’s better to cook it more slowly– it’ll still thicken but it won’t catch, and you won’t be searching the house for burn salve. Mine took about half an hour, on a heat diffuser and stirred almost constantly, to get to a deep orange colour and thick enough for the wooden spoon to stand up in.

Line a 7”x7” cake tin with baking parchment, pour in the paste and smooth the surface. Put in a 50C oven until set – what you’re aiming for is a glistening orange jelly that’s firm enough to be cut into chunks or slices but not chewy. I baked mine for an hour, then turned off the oven and let it go cold with the paste still in there. When I took the paste out of the cake tin I thought the underside was still too soft, so I upended it on a baking tray and gave it another hour at 50C.

When the paste is cold, wrap in baking parchment and foil and keep in the fridge – it should last up to a year if you’ve got it dry enough.

When you’re through with worrying about the paste, take your reserved poaching liquor and measure it. Place in a saucepan with 225g of sugar per 300ml (I had 350ml).

Heat slowly till the sugar dissolves, then boil to setting point. Because you cooked the quinces with their skins and cores the pectin content is pretty high and it won’t take long – mine took about 10 minutes. You should really skim the surface at this point but I didn’t bother. Pour quickly into a warmed sterilized jar – once it reaches setting point it will solidify much more quickly than jam.

Don’t submit it to a W.I. competition because it won’t be crystal clear, but present to loved one with toast, and wait to be told it’s the most delicious thing they ever tasted. Your work here is done.