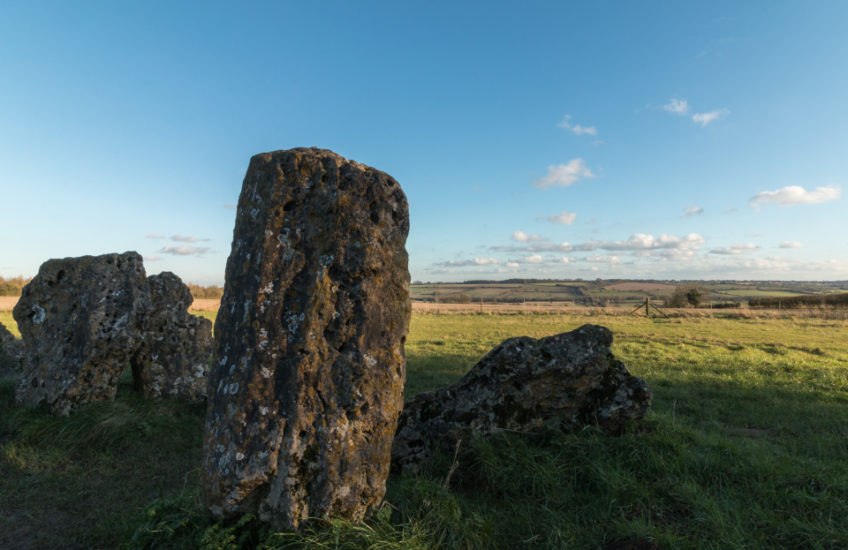 We had light again today, and I took advantage of it by getting sets of shots at both ends of the day. This morning’s dawn was frosty and briefly very colourful, but I’ve chosen this late afternoon image of one of the Rollright Stones as my photo of the day because it’s the first time I’ve ever visited them.

The Rollright Stones are a complex of three ancient monuments lying on the border of Warwickshire and Oxfordshire, close to the town of Chipping Norton. The oldest monument is now called The Whispering Knights, and is thought to be the remains of a Neolithic burial chamber. This is part of a larger Neolithic or early Bronze Age stone circle called The King’s Men, of which there’s a wider view here. The third and most recent monument is a single standing stone now called The King Stone, which is thought possibly to have been a Bronze Age cemetery marker.

I’m not of an especially fay disposition, but I find that there is something emotionally powerful about places which held great religious or ceremonial significance to our ancient ancestors. I think it’s because one can’t really know what the people were like who constructed these monuments, and what was in their minds as they used them, that I tend to find my imagination constructing fantasies around them.

The site isn’t in any way isolated – it straddles quite a busy road and the land around the stones is farmed – but I don’t somehow think I’ll be going up there on my own to take night shots. Even this afternoon I had a bit of a shock when I was photographing the Whispering Knights and suddenly realised that a man was walking up behind me – but it turned out that he’d been sent to get photos for a school project by his daughter. We politely circled the stones, staying out of each other’s shots, and then he left, making the very English, but I think incontrovertible, comment that it’s surprising what you can find if you go looking for it.