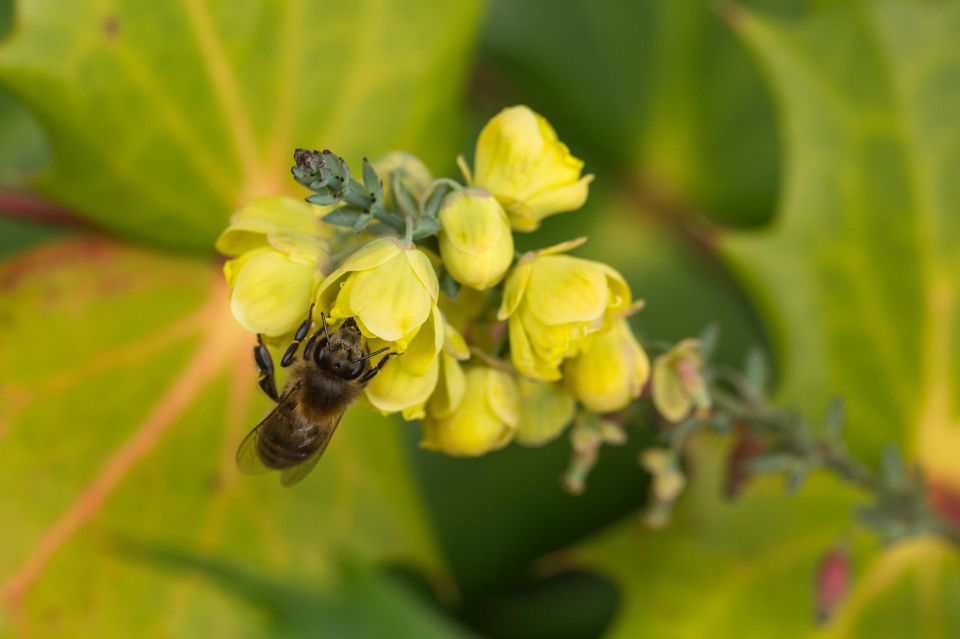 Even though it was cold and windy today, the sun came out for the second day in a row and lifted my spirits. While I was out with Arthur this morning I could see quite a lot of flying insects, but without my glasses on I couldn’t identify them, so back at home I took the camera and macro lens out into the garden to see what I could find. It didn’t take long for me to discover that there were a lot of honeybees on the large Mahonia japonica in the back garden, and this one was far too busy feeding to be worried about my presence.

I’m not a fan of mahonias – they’re invasive, and I find them ugly (though the flowers are quite pretty). So this one had been scheduled for destruction and replacement with something nicer, but discovering that it’s feeding these early pollinators has given me pause – I don’t think I can remove it unless I can think of something nicer which also flowers early. I already have several daphnes and viburnums, but bees and hoverflies don’t seem to like them – so I will have to do some research.

R is not happy about honeybees appearing so early, and is hoping we might get a sudden cold snap. The chimney that runs through his study has been invaded by bees for the past couple of summers, and he had been hoping to get it made secure before the flying season started – but the builder isn’t scheduled to come and quote until next week.