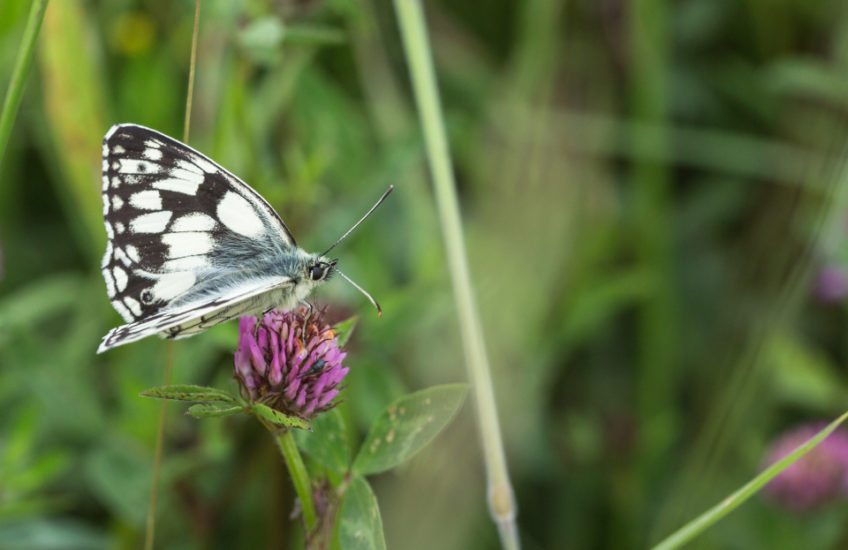 With poor weather forecast for the next couple of days, I thought I had better get out and do a butterfly hunt this morning. There’s a field on the far side of the village which I always refer to as “the butterfly field” because it’s ungrazed and left largely unmown, and it contains a wide variety of tall grasses and wild flowers, which provide shelter and food for a range of butterflies.

Today the first thing I saw there was a Common Blue – this is a species which overwinters in its larval form, with the first brood adults emerging in the middle of spring; by now they have mated and are coming to the end of their lives, so they’re very worn and difficult to spot, and I wasn’t quite fast enough to get a photo. The second brood imagos will appear late next month, and though tiny will be much brighter and more obvious.

There were a good number of Ringlets and Meadow Browns in the field, and I was quietly pursuing a Ringlet in the hope that it would land, when this Marbled White suddenly flew past me at face height and then dropped down onto the clover flower. I was very surprised because I’ve been trying to photograph them since last week, with only limited luck – they’ve been shy and skittish, and when they have settled have tended to do it in quite deep cover. Today though I got some nice shots of three different individuals (two males and one female) in different parts of the field; I assume that they must have been slowed down by the weather, which was overcast, windy and not especially warm. Last week this field seemed to be full of Large Skippers, but today I only managed to photograph two – one of which, it was pointed out to me this evening, was actually a Small Skipper.

Just across the road is another field which is cultivated; at the moment half of it is laid to barley, and the other half has some kind of leguminous crop which is currently in flower – and on the legumes were some more Meadow Browns and a Small Tortoiseshell. Interestingly there was also a largish flock of house sparrows in among the legumes – I couldn’t see what they were doing because the cover is quite dense, and I only realised they were there when I disturbed them. On the way home I stopped for several minutes to watch a pair of greenfinches encouraging a single fledgling to fly from place to place; the call the three of them were making sounded like “Why? Why? Why?”, which caused me a level of ironic amusement because it’s a word that’s rarely far from the forefront of my mind right now.

Quite soon after I arrived home the forecast rain duly arrived, so I was glad I’d already bagged my shots and records; seven species of butterfly, plus some hoverflies and a few other bugs, seems like a reasonable haul for an unseasonably cold day in June. I’m featuring the Marbled White because it’s the best photo I’ve ever managed of one, and though they’re quite common in southern England they’re rare elsewhere. The extra is a Meadow Brown, and is probably the best shot I took today. 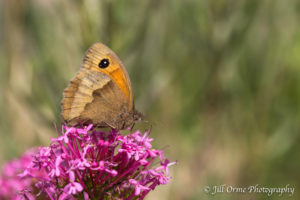