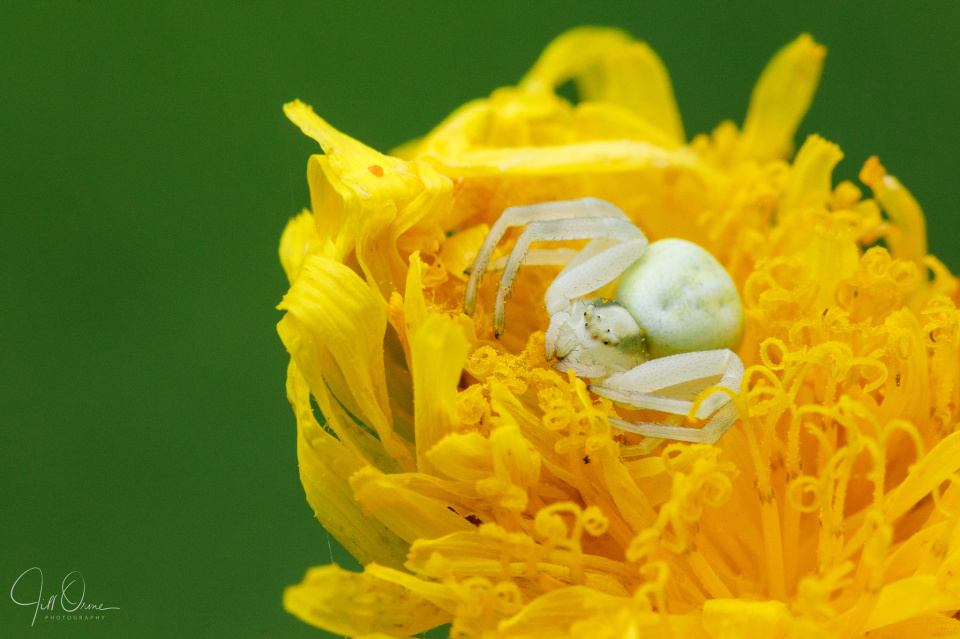 It wasn’t a good day for macro photography, being heavily overcast and windy, and in the end I had to stake the tall stem of this weed – which I think is a sow thistle – to stop it whipping back and forth. The spider was totally cool with the her perch blowing around, but was less impressed when I pegged it to my stake, drawing in her forelegs from the hunting stance in which I’d first noticed her (which you can see below), and shrinking down among the petals. The good news for her was that having stabilised the flower head I was able to work quickly, and once I had my photos I went back to the house and left her to her hunting. 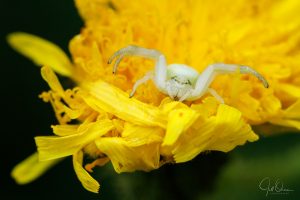 Misumena vatia is probably the commonest crab spider we have in the UK, though it’s predominantly a south-eastern species, with fewer records from Wales than England, and fewer still from Scotland. It’s strongly sexually dimorphic: the paler females can be up to 1cm long, while the darker males are only around a third of that length. Females are predominantly white, though they often have darker shadowing on the sides of the thorax and can also have red stripes along the sides of the abdomen, and as adults they have a limited ability to change colour, in response to the predominant colour of the plant on which they’ve settled. If she stays on this flower for long enough, this one will accumulate a pigment under her carapace which will eventually turn her yellow. It will take her between two and four weeks to achieve this, but if she then moves to a white flower she’ll excrete the pigment in just a few days, and turn herself back to white.

Misumena vatia females hunt by positioning themselves on a surface that’s likely to attract other insects, and simply waiting for one to land. They then grab the prey with their long front legs and immobilise it with venom, before injecting it with digestive enzymes, sucking out the tasty stuff, and discarding the exoskeleton. They don’t build webs, and only produce silk for two reasons: to lay drag lines, which males can follow to find them for mating, and to enclose and protect their egg sacs. They can live up to two years, and will only breed towards the end of their lives. Once a female has laid her eggs and enclosed them in silk, she will guard the eggs until the spiderlings hatch, after which she will die.