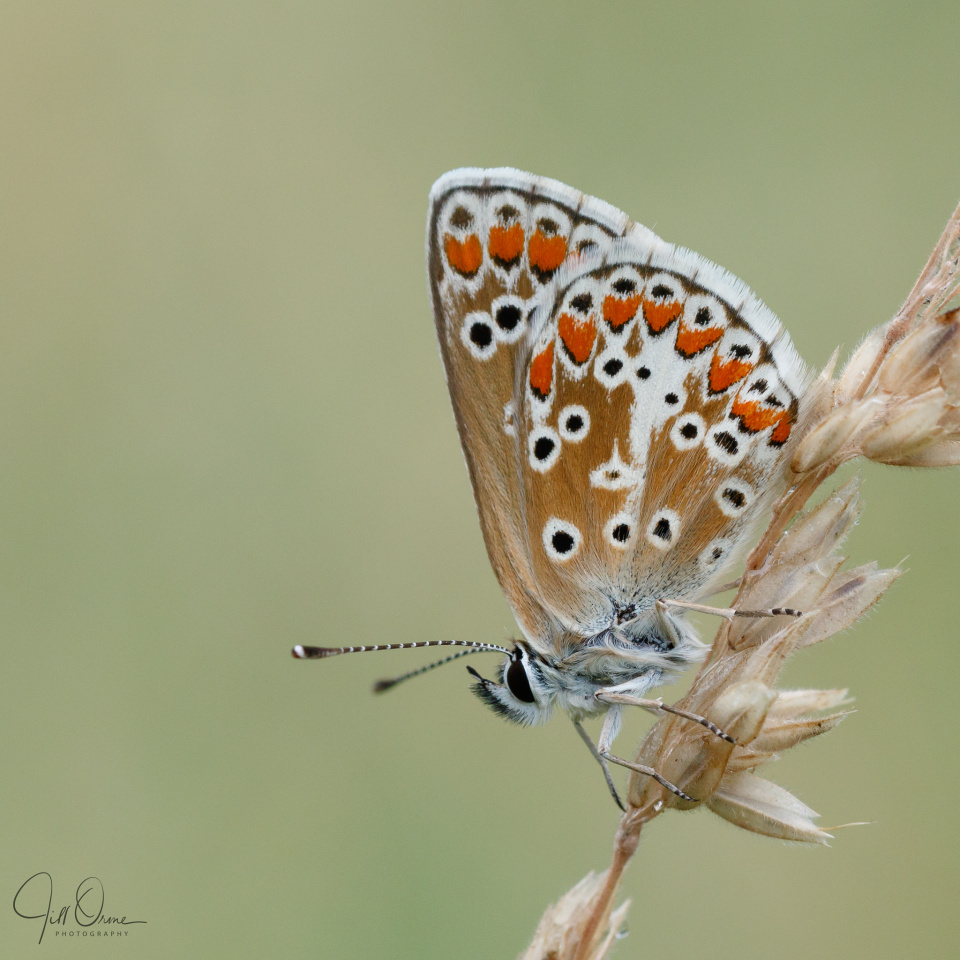 I went for a walk in the village this afternoon, primarily looking for grasshoppers and crickets, and hit lucky in Tilly’s field. Not with the Orthoptera – there were a few grasshoppers around, but most of them had faster reactions than mine, and I didn’t see any crickets at all – but in spotting a tiny fluttering among the grasses, and realising that I’d found my first Brown Argus of the summer.

The Brown Argus produces two generations a year throughout most of its range within the UK, and this one is so pristine that it has to be a newly-emerged second brood specimen. These begin to appear at the end of July and the beginning of August, and fly into the middle of September; the eggs they lay will hatch around mid-August, and will overwinter as larvae before pupating in the early spring. The first brood adults will begin to emerge in early May and will fly into late June, but in my experience they tend to be elusive, so it’s not unusual for my first encounter of the year to be with a second brood individual.

Technically the Brown Argus isn’t a brown butterfly, but a blue one – though unlike its cousin the Common Blue it has no blue scales on the upper surfaces of its wings. In the right light it can display a slight blue sheen, but even in the flat and dreary light we had today there’s a hint of blue in the body hair of both the upper and under surfaces. Though you wouldn’t easily confuse a Brown Argus with a male Common Blue, you might mistake one for a female, unless you had a good view of the spots on the under surface of the hindwing: the Brown Argus has two spots on the forward edge of that wing that are so close together they’re often described as a colon mark or a figure 8, whereas the corresponding spots on the Common Blue’s wing are much more widely spaced. The Brown Argus is around 15% smaller than the Common Blue, though that’s not especially useful information if you’re examining a single butterfly. 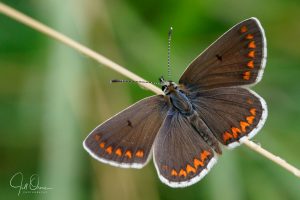 I’ve been trying to decide whether this Brown Argus is a male or a female, and I have to admit that I’m not entirely sure. One of the criteria that people often quote is that the female underwing is darker and more obviously brown than that of the male – but that’s partly dependent on the light, and difficult to judge in isolation. Another guide is behaviour, which tends to be passive in females and territorial in males, but again, this only helps where you can see interaction between two or more butterflies, and this one was entirely on its own. More helpful – perhaps – is the suggestion that the orange spots, or lunules, on the upper surface of the wings tend to be bigger in females than in males, and if that’s true, this tiny chap is most probably a male.