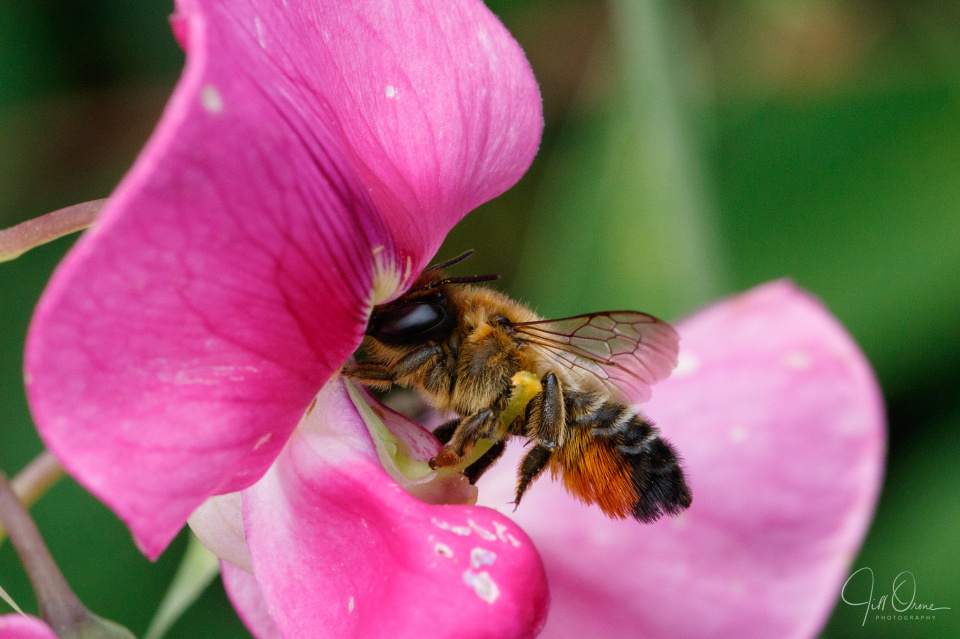 I don’t know who Willughby was, but he or she managed to get themselves a truly beautiful bee. Worldwide there are over fifteen hundred species within the genus Megachile, but in the UK we only have seven, and M. willughbiella is perhaps the most commonly seen, especially in the southern half of England. It’s not especially fussy as to either habitat or diet, and frequently exploits gardens, where it will nest in dead wood or soil, or sometimes in man-made cavities such as gaps around window frames, and it’s also a very frequent tenant of bee hotels. In gardens it will feed from a range of flowers including campanula and pea, but when foraging in wilder areas it’s especially drawn to knapweed and thistles.

Females of all the Megachile species collect pollen underneath their abdomens, rather than on their legs. The black and orange pile you can see here is the scopa, or pollen brush, and I was pleased to get such a good view of it, because usually when I run across one of these bees out foraging the whole surface is so crusted with pollen that you can’t see the colour of the scopa at all. Fun fact: the two-tone scopa is peculiar to M. willughbiella females from mainland Britain and the Isle of Man: in Ireland, the whole of the pollen brush is vivid orange.

R and I did several hours of Heroic Gardening today, removing a number of huge plants that had either outgrown their allotted space, or simply outstayed their welcome. Right now I’m feeling a little nervous about this (not to say guilty about the destruction of healthy plants), but I think the garden will benefit from the cull. I kept the camera to hand while we were working, and spotted a number of nice invertebrates over the course of the day. I’ve posted a few to my Facebook page, if you’d care to take a look.