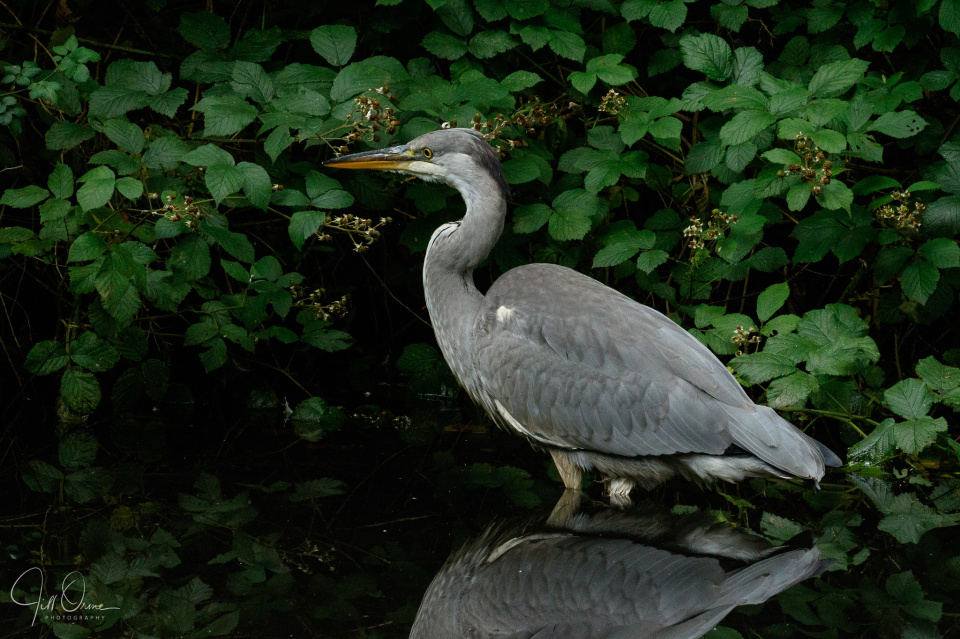 “How can you bear not to post your Welsh dragon?” said R, when I told him that this was today’s photo.

I did, it’s true, get a Welsh dragon, and he was even the right colour, being a Common Darter, but he wasn’t THE dragon after which we’d gone to Forest Farm, and this encounter with one of two juvenile herons (this one working the canal, and the other the feeder river a few yards away), provided me with what I think is my most interesting, and certainly most dramatic, shot of the day. We did have a close encounter – very close actually – with THE dragon: a Golden-ringed Dragonfly, which I’d first picked up by the sound of its wings rattling against foliage, and R’s keen eyesight had then pinpointed deep in a nearby reed bed, suddenly lifted like a Harrier jump jet, paused momentarily in mid air a couple of feet away from R, and then zoomed away along the towpath before I could even contemplate lifting one of the cameras.

When we got back to Baby B’s house he was lunching on prunes, and even though I could hardly operate the camera for laughing I still managed to take nearly 200 photos of this event. I’ve spent much of the evening trying to cull them down to a reasonable number, caught between laughter and nostalgia because they remind me so strongly of B’s mother devouring plums almost exactly thirty one years ago, and coating not only herself but every nearby surface with sticky purple purée. One of the deep joys of grandparenthood is seeing your child reflected in their offspring – and thus to a lesser extent yourself, and other members of the family too – but even though I’m happy to see the circle turn, I sometimes find that the juxtaposition in my mind of ‘now’ and ‘then’ makes me feel seriously old.