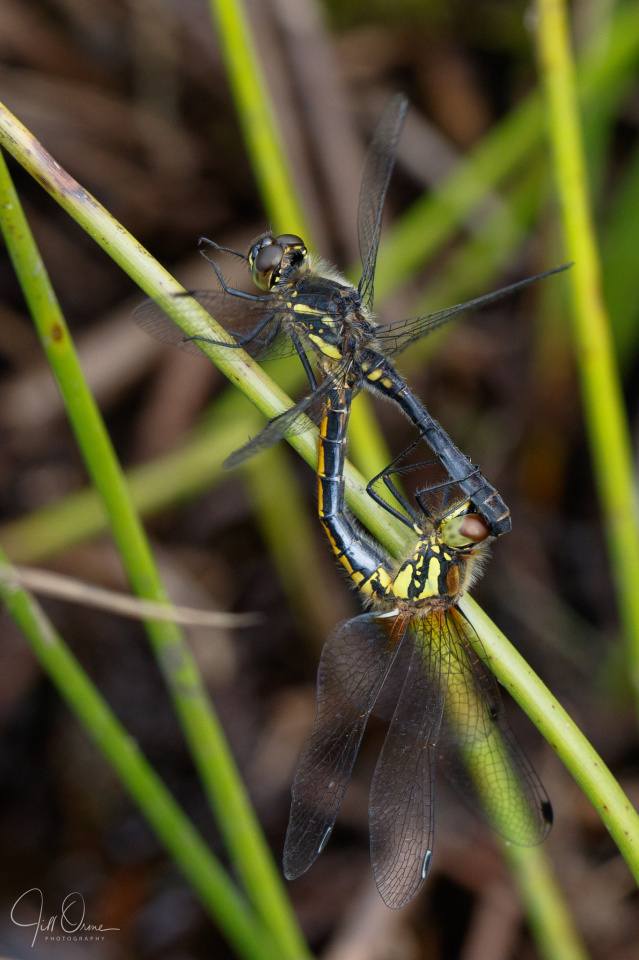 I made a return trip to the Long Mynd this afternoon, in search of my favourite small dragons. Last week’s abortive trip slightly dented my faith in the Pole Cottage pool, but unlike last Thursday today was warm, with a mixture of sun and broken cloud, and only a very light breeze: in other words, perfect conditions for Odonata. As I pulled into the car park I saw a hobby making repeated swooping passes over the pool, and as these little falcons are renowned hunters of dragonflies, I immediately felt sure that I was heading for a successful afternoon.

Male Black Darters are far less territorial than their Common and Ruddy cousins, but they do tend to adopt favoured perches from which they watch for approaching females. I had already photographed this one a couple of times on a stretch of path with a view over the pool, and when I came back on my third circuit I was slightly surprised not to see him in the same place, and looked around to see if I could spot him. This was lucky, because if I hadn’t been actively looking I’m not sure that I’d have noticed him down among the rushes with the female – their colouring camouflaged them remarkably well. I like his rather insouciant attitude here, supporting them both by gripping the rush with just his two middle claws, and holding his forelegs aloft as if to say, “Look! No hands!”

As well as around twenty Black Darters, a lone Four-spotted Chaser, and innumerable Emerald and Common Blue Damselflies, the Pole Cottage pool was being patrolled by several Common Hawkers this afternoon – though they were fast and fierce, and most of the photos I managed to take of them were (at best) blurry record shots. I did get one sharp set, of a male attempting to drag an ovipositing female out of the rushes, but as their contretemps ended with him pulling off her head, I think it’s probably best if I spare you those. There are times, I confess, when I wonder why I’m so very enamoured of these insects.