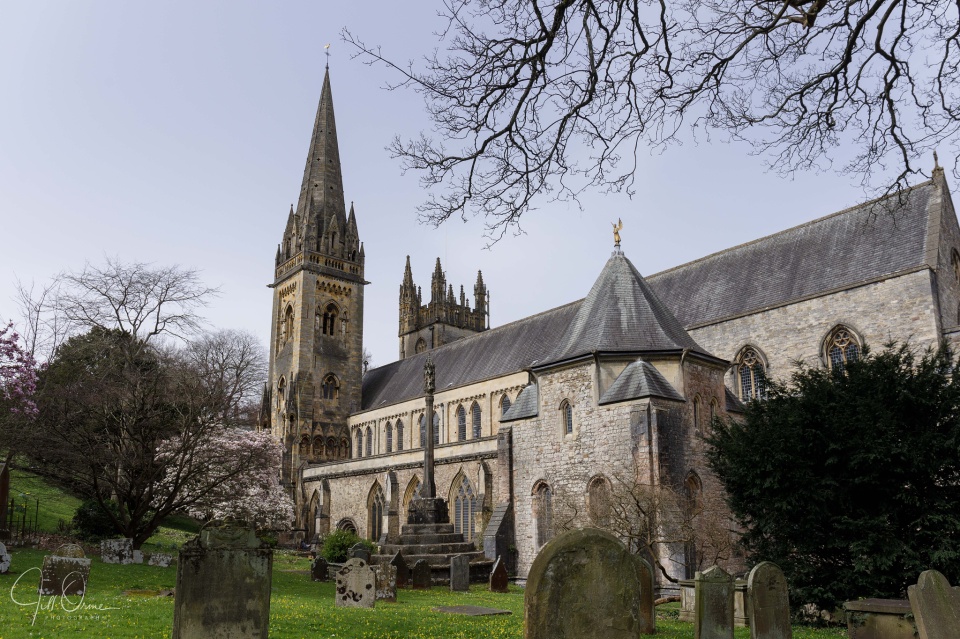 When blipfoto informed me that today would mark my 2500th blip, I suggested to R that he should pose, YMCA-like but forming the digits 2, 5 and 0, and provide me with the material to make a composite image. Sadly, he declined, because you just can’t get the help these days, so here is a view of the interesting, if slightly mad, building that is LLandaff Cathedral. I can’t quite believe I’ve got this far – certainly I didn’t plan to, back when I happened on this site nearly seven years ago and decided to do a 365 – but somehow, stopping seems to be far harder than starting ever was. I’d like to take this opportunity to thank all the people who kindly look at my photos and read my ramblings even though I can probably lay claim to the title of Worst Blipmate in the World, but I should maybe warn you that if you keep encouraging me I’m likely to carry on doing it.

R and I were in Cardiff for the day to play with Firstborn Grandson, who reached three months of age today, and in tribute to his mother has decided that he can look after himself. Leastwise, he sees no reason why he shouldn’t be able to stand up and walk around like the big people do, and a certain amount of bitterness and recrimination ensued at intervals when his legs proved not quite equal to the task. If he keeps training them to the current regime though, they’re going to resemble either Gethin Jenkins’ or John Wayne’s – the jury is out on whose.

Despite the thunder thighs and mule-like kick, Baby B is utterly adorable. Of course. His manipulation skills are coming on in leaps and bounds, and his fingers are rarely still except when he’s asleep. A charming highlight of today was watching him interacting with a Paddington Bear toy that was hanging above him from a frame as he lay on a play mat – that’s to say, alternately chatting to it in baby babble, and making it swing by punching it. The flying fist is almost as impressive as the back and leg muscle control.

When the three of us went out for a walk, R and I decided to vary the route that’s become our routine, and walk up through Llandaff to take a look at the Cathedral. Baby B didn’t mind, though we didn’t push our luck by going inside, and by the time we’d looped round to our usual park he was sound asleep. My first thought on looking at the outside of this building was “mishmash”, and a quick look at its Wikipedia page confirmed that judgement. The oldest bits of what you can see here are Norman, from the C12th, though there’s believed to have been a Celtic church on the site previously; but it has been so extensively damaged and rebuilt over the years that it’s a wonder it’s still standing at all. At some point I’ll visit the inside to see if it’s as much of a patchwork as the outside, and to find out if the work done by Edward Burne-Jones, Dante Gabriel Rossetti, Ford Madox Brown, and Morris & Co. during the late C19th has survived.