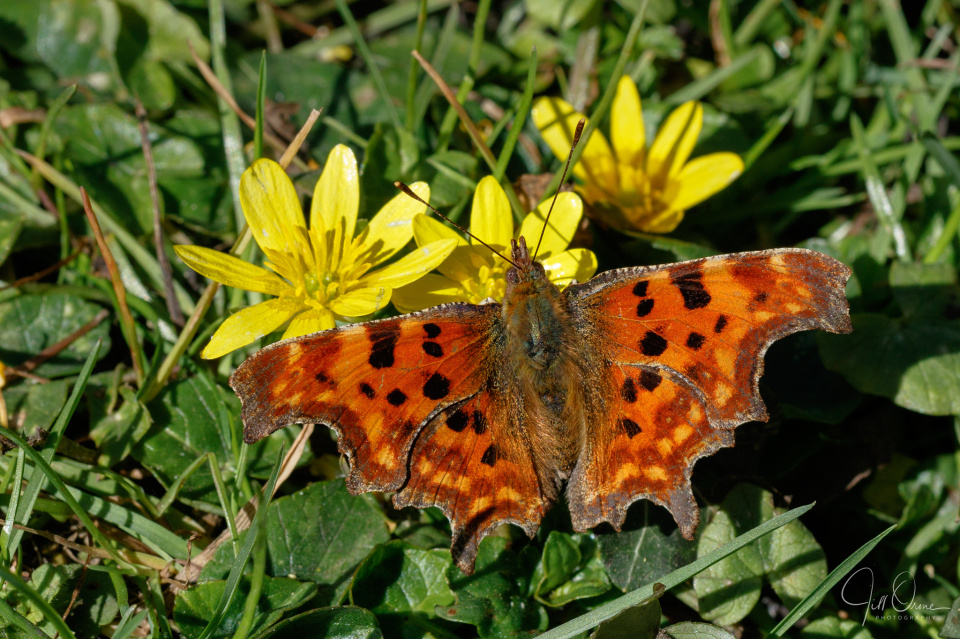 A neighbour told me a couple of days ago  that she’d seen a Peacock butterfly in her garden, and then asked if it’s the Domino that’s red with white spots. I ran a mental list of butterfly liveries and common names, came up with nothing similar, checked in my head that it wasn’t yet April Fool’s Day, and diffidently said that as far as I knew there was no such creature, and I thought she might possibly be misremembering. I’ve been worrying about this conversation slightly ever since, but when I spotted this Comma in our wild garden this afternoon I had a sudden Eureka! moment. Obviously it’s orange rather than red, and the spots are black rather than white, and but that’s pretty close, right? And Comma does sound a bit like Domino….

It’s close enough for jazz, we tend to say in this house. Whether Child Two, the family jazz musician, finds this little saying as amusing as I do is doubtful, but he’s far too cool to do more than lift an eyebrow at such nonsense. In fact he’s so cool that he didn’t bother telling us that he’d passed his Masters, with Distinction, until I specifically asked asked him about it on our last Zoom call (for about the tenth time since he submitted his dissertation). He doubtless thinks that Mummy-bragging is extremely un-cool, but I’m sure he knows that I’m going to do it anyway.