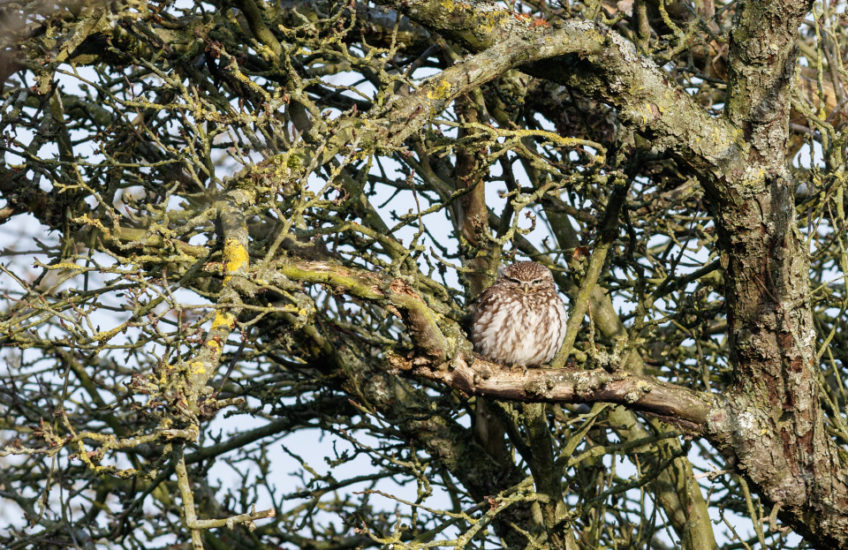 How lucky was I today?!

There I was, standing by the fence in a field about 100 yards from the house, Big Lens resting on monopod, photographing squirrels and Fieldfares in the next-door orchard. I’d really wanted to snap a Redwing, but there didn’t seem to be any about today and I was on the point of deciding that it was time to get out of the perishing cold, when suddenly a huge alarm noise kicked off among the birds in the orchard. I could just make out a brown and white thing among the branches of one of the apple trees, though even through the Big Lens I couldn’t see what it was – but given the noise that was going on I thought it must be some kind of raptor. I was pressing the shutter button, more in hope than expectation of getting anything usable, when suddenly there was a flurry of movement and a second thing arrived on the branch and cuddled up to the first – and I thought OWLS!!!

The second one moved out along the branch to where I had a pretty good view of it, and from where it watched me with an extremely baleful expression for a while, before taking off and disappearing. Up till this point I’d hardly dared to move, but from where I was standing the first owl was still half-concealed, so I decided to risk trying to get into a better position, and to my delight I managed to find a spot at the fence which gave me this straight-on view. I’ve put in one of my shots of the pair as an extra, and a set of the keepers here. 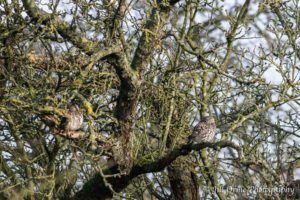 I knew that we had Little Owls in the village – I’ve heard them calling, and one evening last winter when I was walking Arthur I saw one sitting very neatly on a neighbour’s cottage roof – but this is the first time I’ve ever photographed one, and I’m absolutely thrilled about it. I was quite surprised that something this small should cause so much consternation among the other birds, but having looked up the species I now know that they will take small ground-feeding birds, so the alarm was justified. There’s more information about them here.

Before I go, I must say another thank you for the continuing success of this blip, which many of you have been very generous about. If you’ve read the entry you’ll know that I was uncertain about the identity of the butterflies; I posted a query with a photo on the Butterfly Farm’s FB page, and this morning they got back to me with the information that they are in fact Citrus Swallowtails (Papillio demoleus), from the Philippines.