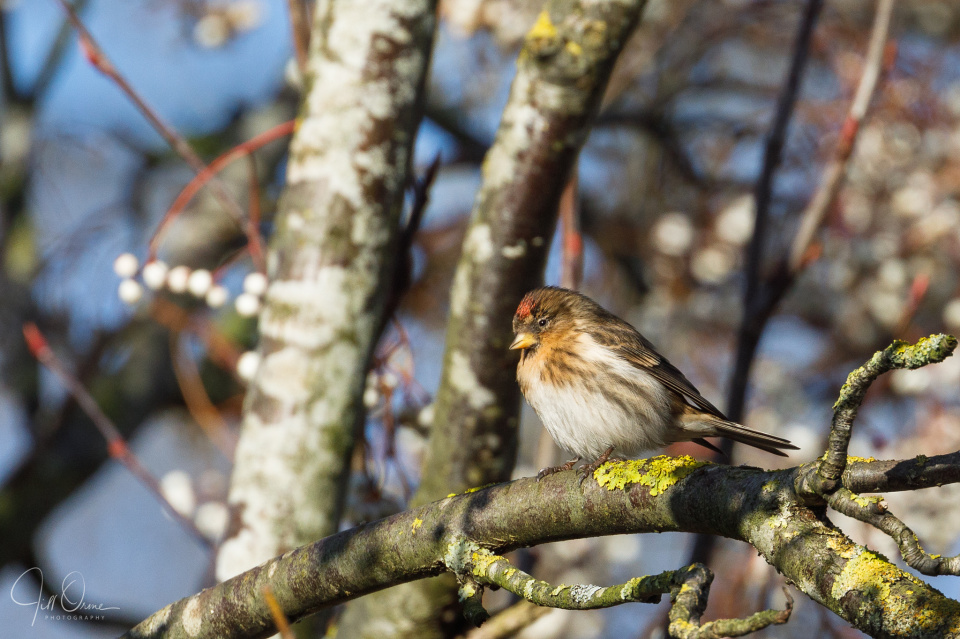 When HelenJG messaged me yesterday afternoon and said that she’d photographed a redpoll at Hillers, I knew where I’d be going today. I think I may have seen redpolls once before, but I can’t be sure because I didn’t manage to to get any confirmatory photos, so the chance to get a definite sighting was unmissable.

When I walked into the show garden this morning, I immediately fell into conversation with a couple of people who were standing on one of the paths staring up into a rowan tree, whose berries were under attack by several bramblings. They told me that they’d just spent a couple of hours in the bird hide to no great effect, so I was quite happy to stand with them, chatting idly and watching the bramblings feeding. After a while I did go down to the hide, but there were five people in there already – which is at least two too many for comfort – so I left and went back to the rowan.

A little while later a couple of other chaps arrived, and we stood together watching the comings and goings of various birds across the garden, including some greenfinches and redwings. There were also repeated fly-pasts by a mistle thrush that was desperate to get at the rowan berries, but was too scared to land while there were people in the area. And then another small bird arrived at the far side of the tree, and we all began to play the What is it? game (Chaffinch? Sparrow?), bending and twisting with our binoculars and camera to try to get a better view, until she finally moved into the light, and two of us simultaneously and triumphantly cried “Redpoll!!”

I’ve never played bingo, but I think I now know how a committed player feels when they get a full house. Certainly I was jiggling about with excitement, and as the bird only stayed in front of us for a few seconds before flying back across the garden into the woodland, and didn’t reappear for the rest of the day, it’s lucky that my camera was steadier than its owner, and half a dozen of my images were good. As numbers of this winter visitor from Scandinavia and Russia vary from year to year, and it primarily holidays on the eastern side of the UK, there’s no predicting when – or even if – I might get another chance to see one. 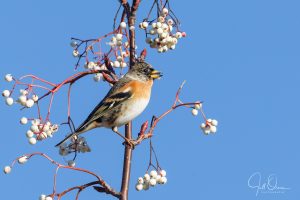 Although this clearly had to be my photo of the day, I can’t say that I was thrilled with the redpoll’s chosen perch, photographically speaking. More pleasing to my eye because of its simplicity, the extra shows a handsome male brambling on the rowan against the clear blue sky.