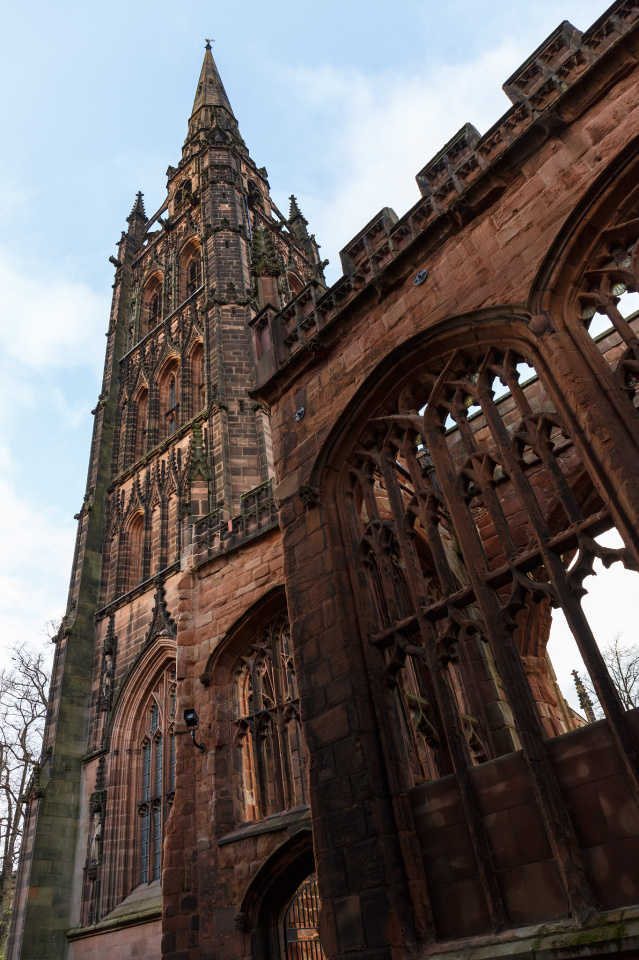 I cried this morning when I read this blip. And then I read a whole lot of other stuff on Facebook, some of which made me livid, and some which brought me to despair. And then I found that I had a strong desire to revisit Coventry Cathedral – not for religious reasons because I have no faith, but to walk in the footsteps of its history.

On 14 November 1940 the mediaeval city of Coventry was subjected to a prolonged and devastating bombing raid by the Luftwaffe, which killed over 500 people, damaged two thirds of the city’s buildings, and destroyed the Cathedral Church of St Michael (though surprisingly the Guildhall, outside which I was standing when I took this photo, survived). The effect of this raid on the city and its people was told in a recent BBC documentary, and is movingly recorded here. But almost immediately after the Cathedral was destroyed, the Church authorities took the decision to rebuild it as a symbol of hope, while preserving the ruin as a reminder of the horror of war.

I’m not going to tell you that walking here and thinking about all of this brought me to a state of peace and forgiveness. I’m still angry and frightened about the bigotry, misogyny, racism and xenophobia I’m seeing in Britain and America, and I won’t just put up and shut up, as those who consider themselves to be the winners in the plebiscites that seem to have opened Pandora’s box in our two countries would like us losers to do. Because this is where that road can lead.

We owe it to our children and grandchildren to defend the peace our parents and grandparents built, and the advances we’ve made over the past half century towards understanding and acceptance of those who are different to us. There is no workable solution to the problems we all face that doesn’t involve discussion and compromise, and none of us is strong enough to succeed without the help and support of others.

Coventry Cathedral’s site is here, if you’d like to know more about the building, and its ministry of reconciliation.