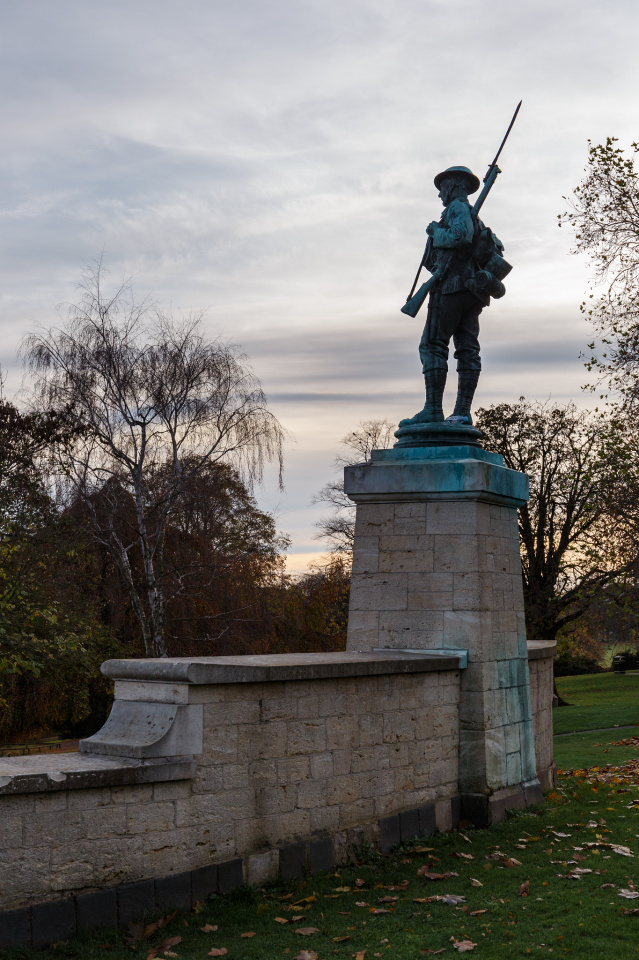 They went with songs to the battle, they were young,
Straight of limb, true of eye, steady and aglow.
They were staunch to the end against odds uncounted,
They fell with their faces to the foe.

They shall grow not old, as we that are left grow old:
Age shall not weary them, nor the years condemn.
At the going down of the sun and in the morning
We will remember them.

Evesham has a striking and powerful War Memorial, sculpted by Henry Poole R.A., and unveiled in August 1921. As well as this depiction in bronze of a soldier in battle dress, there is a curved limestone screen which incorporates benches, and on which are mounted plaques listing the local men (and one woman) who were killed during the two World Wars. The central plaque on the plinth gives the dates of World War I as 1914-1920, which I’ve never seen anywhere else; this is because soldiers of the Worcestershire Regiment fought in Russia, where peace was only declared in 1920.

By the end of Remembrance Sunday I expect that quite a few tributes will have been laid at the Memorial. Today there was a wreath from the Royal British Legion, a few scattered poppies, and several small named crosses. While I was taking my photos I chatted with a lady who had come (with a dog called Lulu, who was not remotely interested in either memorials or chatting) to lay a cross in remembrance of her father, who died in World War II.

I’ll post some more views of the Memorial on my Facebook page within the next couple of days. Today I started an album of photos of Coventry Cathedral, if you’d like to see more of that extraordinary building. I wasn’t able to get as many shots inside the new Cathedral yesterday as I would have liked, because it was preparing to host the Apprentice of the Year awards and was full of broadcasting equipment and caterers, but I intend to visit it again soon and I’ll add some more images to the album then.

I’ve spent quite a bit of today reading tributes to Leonard Cohen, whose death on Tuesday was announced late last night. Selfishly I wish I’d known yesterday, because it somehow doesn’t seem quite right to mix up sadness at the deaths of those who gave their lives too early during wars, with grief over a man who did grow old (and did it with tremendous grace), and who seems to have felt that he was dying at the right time, and to have been at peace with what was about to happen.

If you have the time, I’d recommend listening to his last interview with The New Yorker, which is not only poignant but funny. This is my favourite recording of my favourite Cohen song. And here is the heartbreakingly tender letter he wrote to his former lover Marianne before she died, and the reply that was sent to him by one of her friends.

To finish on a lighter and very personal note, I’d just like to mark my admiration for the Child known to some of you as People Poems, who will be travelling to Guildford tomorrow to support Sara Watkins (of the band Nickel Creek), who is performing just three solo gigs in this country. I’d love to go, but he’d probably be cross if I did – what cool young musician would want their aged mother cheering from the sidelines? So I’ll just have to cheer from here instead.