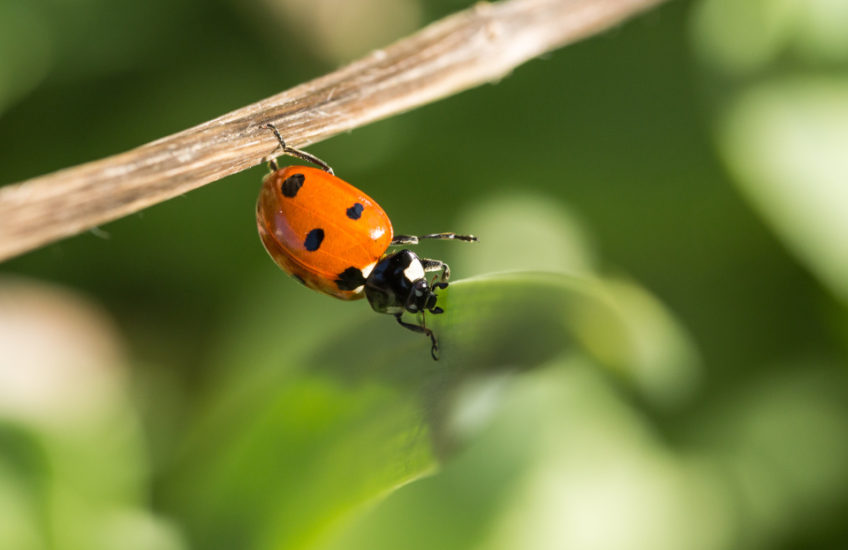 I bet you wish you could do this, don’t you? Personally I find it hard enough just standing on my feet without falling over – using them to hang onto last year’s crocosmia stems while I reach for a distant blade of grass is way beyond my abilities.

After spending much of the morning in Stratford while Arthur was bathed and groomed (a highly unwelcome imposition, he informed me, what with his age and everything), and a large block of time in the middle of the day sitting at my desk raging at my financial software, I finally managed to get out in the garden at about 3pm. I did a little bit of weeding, and quite a lot of photographing – followed by several hours of culling and processing shots, and checking the identities of various bugs.

I couldn’t resist posting the ladybird as my main shot, but the extra today is really rather exciting, if bugs are your bag. As soon as I spotted this bee on my French lavender I knew that it was quite unusual, and it turns out to be something called Melecta albifrons, which is a cuckoo bee. Sadly its victim is the lovely Anthophora plumipes – the hairy-footed flower bee – which has slightly put me off my new piebald friend; but I guess that the cuckoo bee also has its place in the scheme of things. 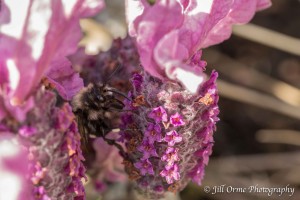 What happens is that the female M. albifrons goes into the nest burrow of a flower bee and lays her egg next to the pollen which the A. plumipes has left as a food supply for her own larva. When the egg hatches it eats the pollen and pupates, and next year it will be a cuckoo bee that emerges from that burrow rather than a flower bee. Sneaky, huh?

While strongly disapproving of its morals, I’m pretty chuffed to have spotted M. albifrons because it’s both striking and rare. I fully expect my iRecord of it to be flagged by the program as unlikely, so it’s particularly lucky that I got several decent photos to authenticate the record.