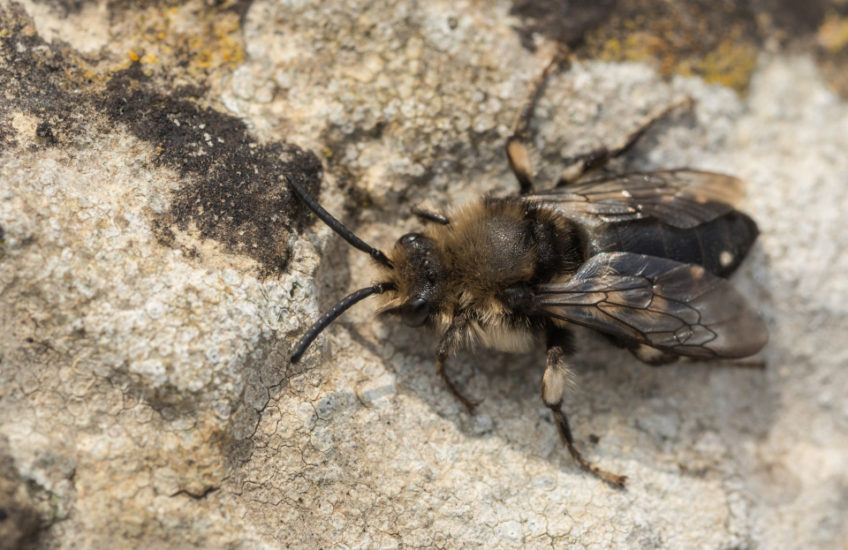 R and I did some Serious Gardening today: the huge, old, disintegrating shed which we ironically call “the garage” needs a new roof (or burning to the ground, which would probably be my preference), and we had to clear a lot of ivy and honeysuckle away from it so that the builders can do their stuff. All you really need to know is that a small involuntary “Ooof” noise escapes from me now every time I move a muscle.

Tomorrow I suspect that I will mostly be sitting in a heap.

Somewhere between gardening and making dinner I took a stroll with the camera, trying not to “Ooof” in the vicinity of bugs because they really don’t appreciate it. I found a hoverfly and four different kinds of bee, including this Melecta albifrons – the cuckoo bee I posted as an extra shot yesterday. It may well be the same individual, given that they’re not common and that it was sitting on a piece of wall next to the French lavender on which I photographed it yesterday.

The lavender was busy with other bees at the time, and it seemed that the cuckoo bee was nervous of mixing with them, so it waited here where it was pretty well camouflaged. I might easily have missed spotting it, but after a few days of bug hunting I’ve started to get my eye in again – something you know is happening when honeybees start to look big. It didn’t much enjoy my attention, and flew away just after I took this photo – but a few minutes later I spotted it again on the lavender, so at least it got its meal in the end.