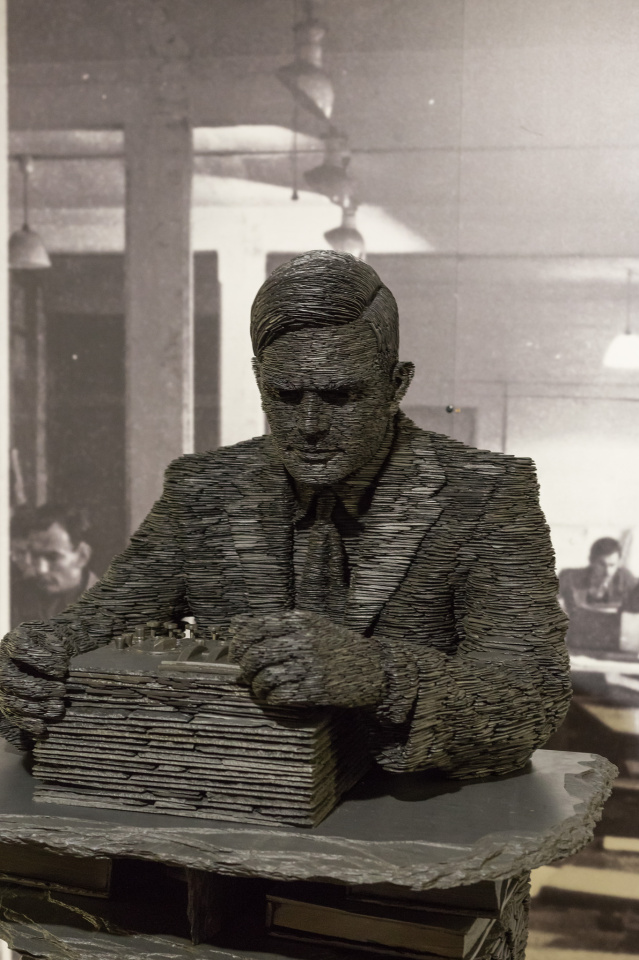 I arrived late at the blipmeet, owing firstly to a very slow walk with a very old dog, and secondly to truly awful traffic (when I couldn’t actually get off the Longbridge roundabout onto the M40 because the motorway consisted of 3 lanes of stationary traffic I almost gave up and went home) – but after about an hour of walking around the site and checking in what seemed the most likely places, I happened on the blippers in one of the cafés.

After a bit of a chat we continued our walk around the Park, led by Bom who had organised the day. I especially enjoyed the codebreaking huts, which contain some really interesting artefacts and interactive displays, and the museum, which has a working replica of one of the bombes, as well as this striking statue of Alan Turing, created from Welsh slate by the sculptor Stephen Kettle.

I thoroughly recommend Bletchley Park if you’re in the area; it describes itself as “a treasured heritage site designed to preserve the important story of the Codebreakers during WW2… [with] no connections to the government and receiv[ing] no funding from government agencies”, and I would say that it fulfils its aim admirably and deserves to be supported. I’ll definitely be going again as soon as R has the time to go with me: there’s so much to see and learn that you can’t really take it all in on one visit. One statistic that I do remember though, quoted by the steward who was demonstrating the bombe, is that historians today tend to think that the work at Bletchley Park probably shortened World War II by two years – saving an estimated fourteen million lives on both sides of the conflict. And then, when the war did come to an end, the people who had worked so intensely on this extraordinary task simply went back to their pre-war lives and didn’t talk about what they’d done – when my family moved to the area in the 1970s Bletchley Park was barely even spoken of, and it’s only in the last few years that the work of the codebreakers has been properly acknowledged.

The Park’s own web site is here, and there is more information here and here.