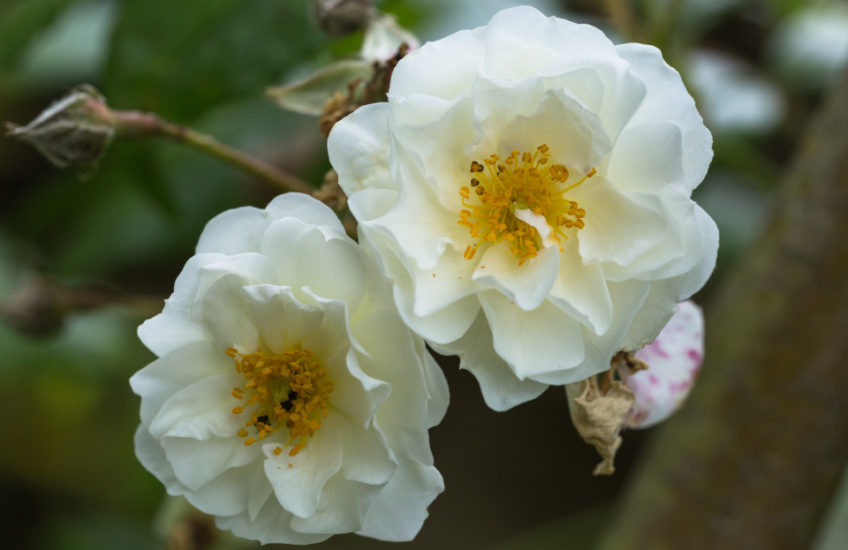 I don’t know the exact truth of this – the world of rose-breeding is full of charmingly romantic stories, of dubious veracity – but I have read that Rosa banksiae was bred in about 1825 by Lady Banks, whose husband Sir Joseph Banks was away on a voyage of discovery with Captain Cook at the time. The rose is itself an absolutely intrepid explorer – I’ve seen it growing up the roof of a thatched cottage, and mine is busily threading its way through a twelve-foot high hedge. There are two different forms, one white and one yellow, each producing a mass of small, double-petalled flowers in May and June. Unusually for a rose it flowers on old wood, so it needs to be either left alone, or pruned very judiciously.

This one self-seeded a few years ago in the gravel of our back yard; when I spotted it I realised that it must be a rose, and assumed that it was a seedling from one of the dog roses that flourish in the hedgerows around the village – but I didn’t want it where it had placed itself, so I carefully pulled it out of the gravel and put it in a pot of good-quality compost. It struggled on miserably for a couple of years, and eventually I decided to give it a little piece of ground between two large shrubs, and see if it would take. As you see, it did.

You may be relieved to hear that on the political front we’ve had a pretty quiet day. Most of the major players in our ongoing soap-opera seem to have taken time out today, which has given those of us who feel the need to keep up a running commentary on the situation time to resharpen our tongues (a phrase for which I’m indebted to the late Dorothy Parker). I’d like to think that the politicians’ quietude was a mark of respect for the fact that today was the 100th anniversary of the opening day of the Battle of the Somme, in commemoration of which there have been services and other events in France, and also in various towns of the United Kingdom with links to regiments involved in the Battle.

The one member of the circus who hasn’t had the decency to keep his head down today is Gove. Why am I not surprised?