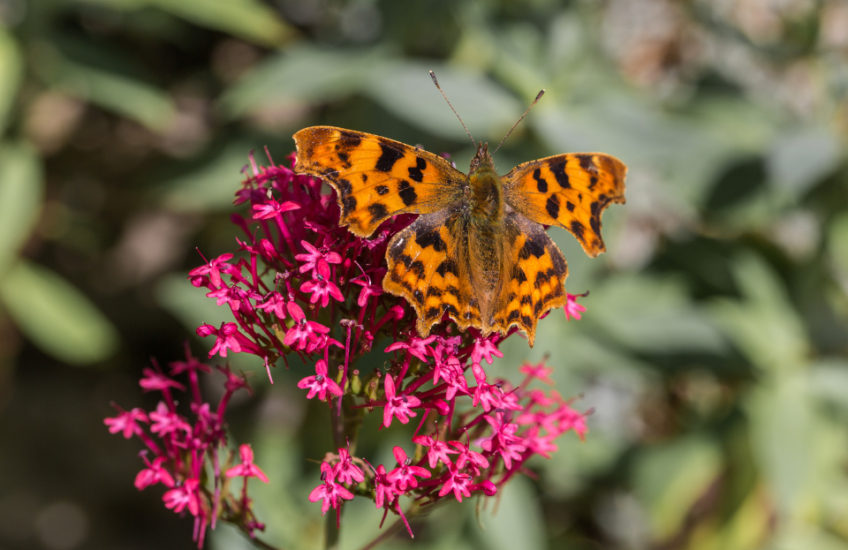 R and I spent the morning gardening; between us we achieved a lot, but it left me very tired – I went to my desk afterwards, intending to catch up on some financial stuff, and fell asleep in my chair.

Eventually I hauled myself upright and went out for a little bug safari – it’s a measure of how wrung out I was feeling that even a quarter-mile walk to the butterfly field seemed too much, but there’s an unmown meadow just a few yards from the house, so I wandered round there instead. There were Meadow Browns and Ringlets, and one Marbled White, but it was still very windy (and cold, whenever the clouds came over), and they were difficult to photograph.

I then tried the path we call The Cut, which transects the village and crosses the stream that runs along the centre of the valley; it was much more sheltered there, and I found a few hoverflies and some extremely gravid Oedemera nobilis browsing on bramble flowers. By now I was pretty sure I had all the shots I wanted, so I went back to the house – and as I turned into the garden was astonished to see this Comma, calmly feeding on a red valerian plant. In all the years we’ve lived here it’s the first Comma I’ve ever seen in this village.

When I uploaded my shots the thing that immediately came into my mind was “there was nowhere the eye could rest comfortably” – a stock phrase which we use in our family to describe violently clashing clothing or décor. Personally I rarely wear orange, and never hot pink, but if I were to sport either colour I would probably avoid standing in front of a vivid lime green background. This set of photos was a symphony in orange, pink and green, (think Stockhausen, rather than Brahms) and at first I really wasn’t sure what to do with them. Luckily, after fiddling about in Lightroom for a while I had the notion of simply brightening and desaturating the green, which flattened the background while leaving the butterfly and flowers alone.

Now I must go and sleep. Ongoing apologies for being so poor at commenting and responding – I hope to catch up (at least a little) tomorrow. If you’re interested, there’s more information about this interesting species of butterfly here.