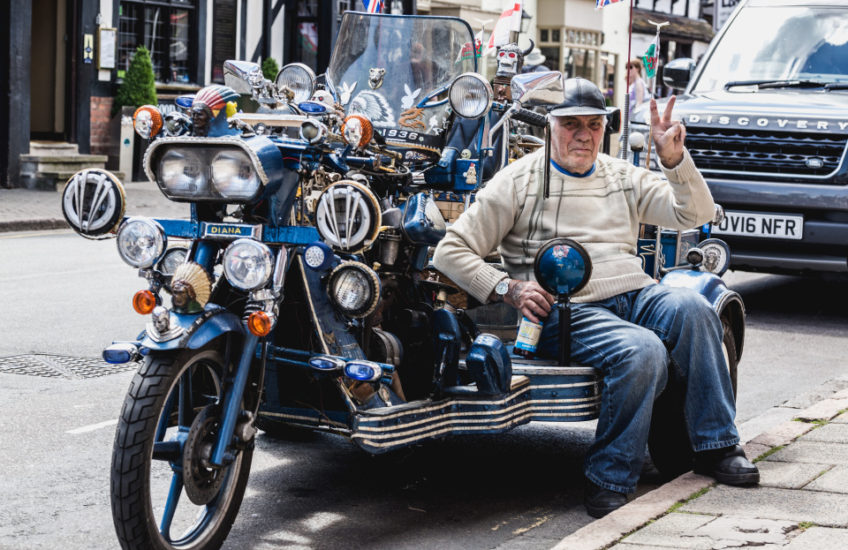 I’ve hovered and havered over today’s shots: do I give you the one I like best, or the one you might find most interesting? In the end I’ve decided that a well-focused butterfly is probably replicable on another day (oh no, I’m wavering again now – it’s a really nice photo…), but this is something I’m unlikely ever to see again, and you’re unlikely to see, well, ever.

R and I had lunch in Stratford today, and as we walked down Sheep Street towards our respective cars (he to drive to York to deliver a training programme tomorrow, and me to return home) we were literally stopped in our tracks by the sight of this vehicle. Having snapped it from the other side of the street I jaywalked through the traffic to get to the near side of it, in order to have a word with its owner and ask if I could photograph him too. He was quite happy, as you see, but for reasons related to incompetence I snatched the shot, forgetting to check my shutter speed, and it’s a little soft; I’ve therefore beaten the hell out of it in processing, to try to make you think it’s supposed to look like this.

If by now you’re twisting your neck to improbable angles to try to work out what it is, I refer you to the extra: the badge is between the number plate and the Diana memorial plate. I said to the owner, “Sir, this is the finest Reliant Robin conversion I have ever seen in my life,” and he replied, “If you ever see another, it’s a fake: this is the original.” Though I suspect that we might not have had very much in common politically, I thought he was a bit of an original too. 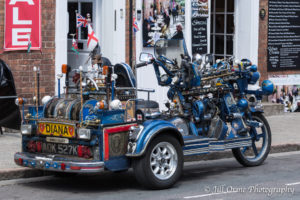 Mentioning politics as I just did, brings me back to the seething cess-pit which is the current state of politics here in the UK. I haven’t mentioned it all for a couple of days, partly to give you a break, and partly because nothing much has been happening (relatively speaking); but I thought it might be helpful for you to have a revision session before the exam. Don’t look at me like that! It’s for your benefit, not mine – it won’t be me in that room sitting a three-hour paper.

I suggest you start here, if you’re OK with NSFW language – it actually amounts to a pretty reasonable round-up of what’s going on. One of the few things that has amused me over the last ten days has been the realisation that the tradition of political satire which began here in the C18th with Gilray and Hogarth is thriving – and if you think they were probably less scatalogical and less libellous, I can assure you that you’re wrong.

That summary was produced yesterday, but essentially the situation isn’t much changed today. Jeremy Corbyn is still leader of the Labour Party, though there aren’t enough MPs prepared to work with him to fill all the jobs he needs doing, and there are ripples which suggest that even his cabal is starting to wonder if this is a tenable situation. I can’t decide if I think Jezza more closely resembles King Lear or Miss Havisham, but either way I’m finding him slightly tragic.

Over now to the Tories, where the final list of runners in the upcoming leadership contest is now known (though the riders, naturally, are trying hard to keep their names off the table):

Theresa May – Ming the Merciless in a wig. Current front runner, but took a blow today when a critical article about her in The Telegraph, having been pulled by the paper under pressure from her office, was published on line anyway by its author. Regarded as not tough enough on crime, but very down on communication and the causes of communication. Doesn’t seem to like women much. Or men. On the plus side, looks like a grown-up.

Andrea Leadsom – former banker, originally a Remainer but then changed sides; claims to be a committed Christian, but apparently didn’t get the memo about loving your neighbours. Heavy backing in certain sections of the party; would trigger Article 50 in a heartbeat, and doesn’t rule out giving the ape Farage a job. Be afraid.

Gove – don’t get me started. Apparently fading, which is about the only decent thing he could do at this juncture.

I can’t see it not coming down to a punch-up between May and Leadsom – but then, what do I know? A fortnight ago I couldn’t believe the country would be quite self-destructive enough to vote for Brexit.

On the subject of which, the shouts of “Put up and shut up! You lost, we won! Get over it!” are getting louder and nastier as the days go on – I suspect that those who are committed to the cause and not experiencing Bregret are beginning to fear that their glorious victory may be snatched away from them. If they think the rest of the country is going to go quietly, they’re wrong – tens of thousands of people marched in London yesterday in favour of the EU, and this letter was delivered to every Member of Parliament on Friday.

I wonder what next week will bring?

P.S. I couldn’t bear it – I’ve put the Cabbage White in as a second extra. 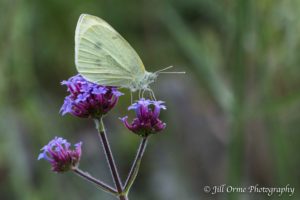