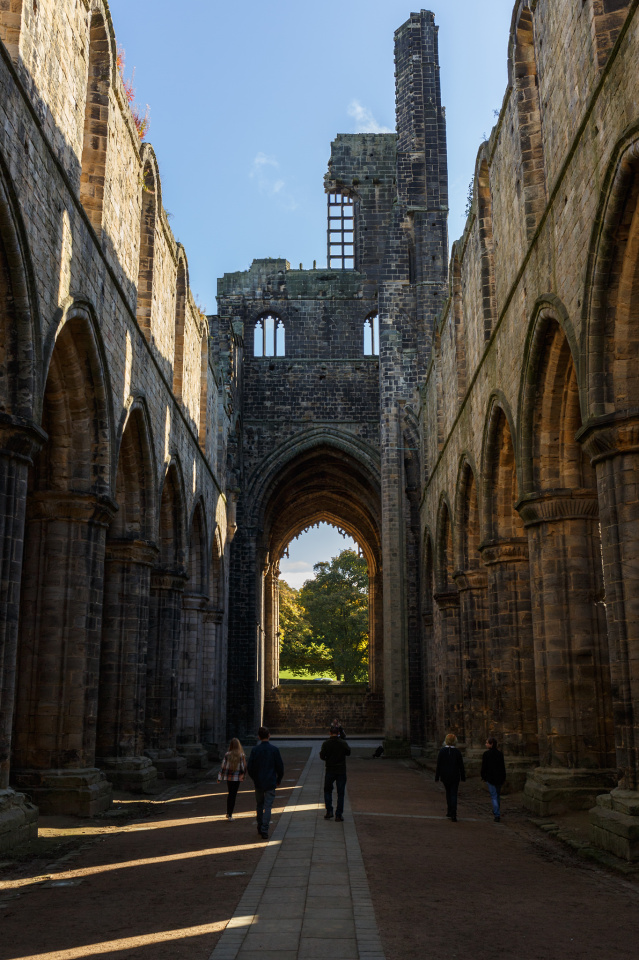 I’d like to tell you that R and I passed a peaceful night at 42 The Calls, but I’d be lying – we’ve sadly reached the age at which either of us could easily nail the lead role in The Princess and the Pea, and we both struggle to sleep on any mattress other than our own. At 5am I gave up the attempt, and got up and read until breakfast time. I thought about going out for a dawn walk, because the light was very nice on the river, but I was just too tired to be bothered.

After checking out of the hotel we had a couple of hours to kill before meeting Child Two and his young lady in Kirkstall, and R suggested that we should go and take a look at the ruined C12th Cistercian abbey. Though not as wealthy as the Abbey at Fountains, Kirkstall was a successful monastic community through the Middle Ages, and one of the largest land owners in the area, but in 1539 it was disestablished by the fat charmless tyrant Henry VIII following his break with the Church of Rome, and with the monks dispersed the buildings fell into ruin. They were bought in the late C19th by a local businessman, who then donated them to Leeds City Council.

There is a pleasant park around the ruins, which on this bright October day was busy with people exercising their children and dogs; and across the road is a museum and a café (which from its name seems to have been created from the original gatehouse). The Abbey itself can be explored without charge, and there were quite a few other people walking round it at the same time as us, but it’s so huge that it didn’t feel in any way crowded. I’ve struggled to decide which of my shots to blip: I love this view along what must originally have been the nave, and in the end I’ve gone with it because the people give a sense of the dramatic scale of the place; but there is also a lovely vaulted Chapter House, which would have been my other choice. There’s an album of shots here and more information about the Abbey here.

After walking off our breakfast (slightly) we went on to the Kirkstall Bridge Inn (where they had lost our booking, but still managed to squeeze us into a tiny corner) to meet H and A, and had a lovely chat and an artery-busting roast lunch. By rights, R and I should be eating nothing but lettuce from now until around the middle of November.