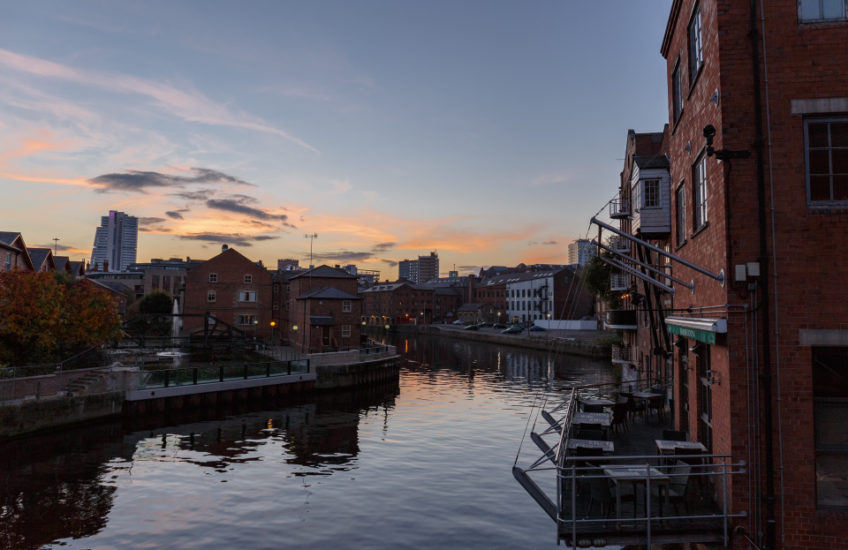 I had occasion to be in Yorkshire today, and R very sweetly drove me up, allowing us to stay over in Leeds and take our baby (24) out for lunch tomorrow. When we’re in Leeds we usually stay at the Marriott, which is perfectly adequate, but is the kind of bland, soulless corporate establishment that could equally well be anywhere on the planet from Toronto to Tokyo – probably a very reassuring state of affairs for the business traveller, but we don’t really think of ourselves as Accidental Tourists. So today we decided to go off-piste, and put up at 42 The Calls, which is a converted warehouse on the River Aire.

When we arrived at about 4pm it took us the precise length of time required to walk across a very small lobby to begin regretting the decision: the place was heaving with young women, all wearing hen party sashes, heavy make-up and thick perfume, and not much else. It wasn’t clear to us why they were queuing in the lobby, apparently needing to hand over £10 each to the receptionist, but there were so many of them and the process for each transaction was taking so long that we began to wonder if we’d manage to check in before bedtime.

The duty manager suggested that we might like to sit on a handy sofa while we waited, which we did; but I found myself watching with dispassionate interest the quite rare sight of R’s temper visibly evaporating – and apparently the manager observed this too, because the next time he appeared in front of us the words “free room upgrade” were spoken. I was quite mollified by this, though after another several minutes R started once again to look like a man whose head was about to start spinning on his neck – but luckily, before he could go full Exorcist the hens dispersed and we were checked in to our room along with two large, complimentary glasses of red wine. A little early in the day, it should be admitted, but in the circumstances very acceptable.

My first thought on looking around the room was, “Ooh, a river view – nice!”; my second was, “Good grief – these windows need cleaning!”; and my third was “Oh, right – I can see why cleaning the windows might be a bit of an issue…” If you look along the frontage of the building on the right of this image, beyond the restaurant which forms the nearer section there is a rather shabby, white weatherboarded oriel window – which is the window of our room. Cleaning any of the windows on that side of the building must be pretty difficult, because it directly fronts the river with no walkway, but getting to that hanging bay will be virtually impossible, I would think. Anyway, it’s a very nice room, with a huge bathroom, and with the added interest of exposed beams which have a large piece of some kind of machinery bolted to them, well above head height (see the extra) – I’ve no idea what it is, but it would be nice to know if it’s a genuine relic of the building’s past as a corn mill. 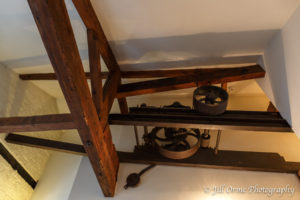 This evening, after I had taken some photos from the Centenary Footbridge which spans the river here, we walked up into the centre of the city and had a very good meal at a French restaurant called Sous le Nez, which I can wholeheartedly recommend.