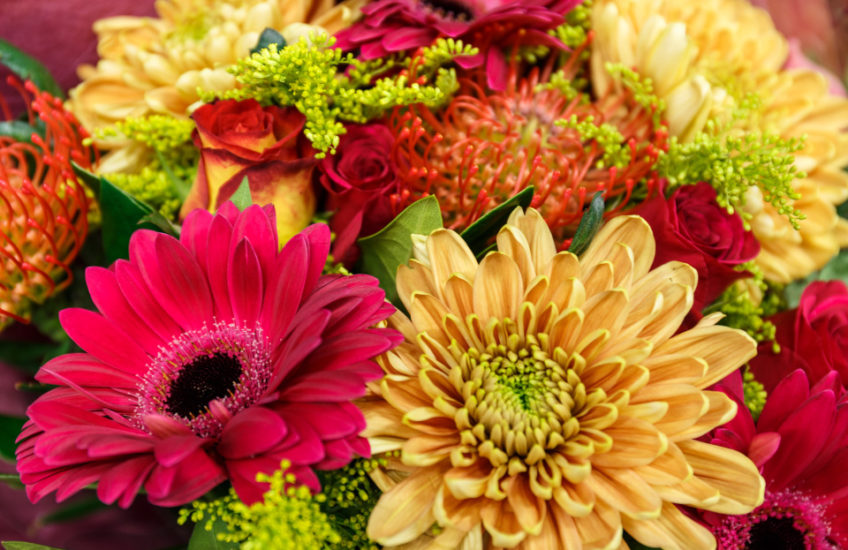 I’ve been running about like a mad thing today, and the best I managed photography-wise was to dash into M&S when I stopped to pick up a takeaway coffee in Stratford at lunchtime, and fire off a few shots at their massed display of flowers. Most of the photos fell squarely into the category of Nowhere the eye can rest comfortably and have been deleted, but this one is almost acceptable, provided you’re wearing sunglasses. I did, of course, receive some Special Looks from staff and other customers for marching round the stand, clicking away – but I was sufficiently armoured at the time to carry the situation off, having just emerged from a worse one at the hospital.

I realised yesterday that it would be a good idea to bring forward my 6-monthly blood tests by a week, as I’ve been summoned over to Warwick next week to see a rheumatologist who has never met me before, and might possibly be more concerned than Dr M. generally is about the condition of my my blood. There’s a drop-in phlebotomy clinic at Stratford Hospital every morning between 9.30am and 12.30pm, and knowing that there are almost never any “customers” towards the end of the session I risked a late-morning zoom into Stratford today – walking in to find that there were about a dozen people sitting around, at least half of whom could be assumed to be waiting to have blood drawn. The machine which dispenses numbered tickets was hanging open and empty, and when I accosted one of the two phlebotomists and asked why, she told me that they had been instructed to close the clinic on the dot of 12.30, and no more tickets would therefore be issued.

“So is there any point at all in me waiting?”

By this time it was 12.15, so I thought that I might as well hang around, on the off-chance that they would manage to fit me in. Over the next five minutes a couple of numbered people were called through, and several new ones turned up and went through the same procedure as I had. Tension rose. I set myself to practise mindfulness, as the worst that could possibly happen was that I would have to make the trip again on Monday. I had just finished explaining what was going on to a very pretty student, and thinking that in less emotionally charged circumstances I would probably risk asking if I could take her photograph, when another thought dropped through my brain and landed in the pit of my stomach with a clang:

A few seconds’ thought placed the camera in the passenger footwell of my car, currently sitting in the hospital car park. I was mindful then, of course: right in the moment, visualising in real time someone walking up to the car, breaking the window and extracting my 5DIII and 24-70. Stay or go? Run or keep sitting? Stick or twist?

The last numbered person emerged from one of the two surgeries, and the lights went off. I don’t think I was the only person whose breathing quickened. By now the student’s mother had arrived and been briefed, and was very cross about the whole situation. One way or another it seemed that there would be trouble.

I was right on the verge of giving up, when the second phlebotomist emerged from her room and said, “I can take one more person. Who’s next?” I replied, casting a slightly unfocused eye around the assembled multitude, “Unless someone tells me otherwise, I think that would be me.” No-one spoke, at least audibly, and I scuttled into the surgery – emerging less than two minutes later to discover that they were all still there…

I really wasn’t sure what the appropriate facial expression was for the Walk of Shame I had to perform to reach the exit. I think the one I contrived was sort-of-apologetic, with a light seasoning of sympathy – but let’s be honest, none of them was likely to be the slightest bit impressed. I could have explained what I had been told while having my blood drawn, which is that a courier was due to arrive shortly after 12.30 to take the morning’s samples to the lab, and wouldn’t wait if they weren’t ready to be sent off – meaning that they would all be wasted – and this was the reason for the non-negotiable cut-off time of the clinic. But I doubt they’d have wanted to hear it – I don’t think I would have, in their shoes. So I said nothing, exited as quickly as I could, and made it back to the car where my camera was still safely sitting, out of sight in the dark of the footwell.

I’ve made a note in my diary for 6 months from now not to go to the clinic so close to lunch time, and definitely not on a Friday. Whether I actually manage to be any more organised about the situation then, remains to be seen.